I should be doing fourteen other things to get ready for youth conference tomorrow and Robbie's birthday on Friday, but we had such a fun hike last night I want to get it posted. I had to turn down an invitation to hike to Cecret Lake with a friend yesterday morning since we had swimming, but decided that would be a perfect way to celebrate Rob's birthday. The Stringhams were game (as always) so we grabbed sandwiches and drove up to the Albion Basin. Here's what it looks like from the base (it's worth the drive even if you don't want to hike): 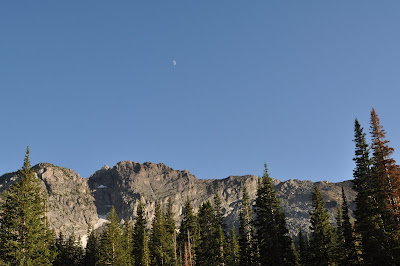 Everything is more fun with cousins. 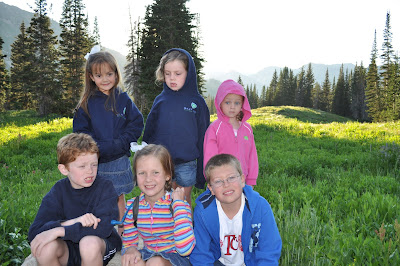 The wildflowers were so pretty. I didn't get any shots that do them justice so we might just have to go back up—I hear they're at their peak mid-August. 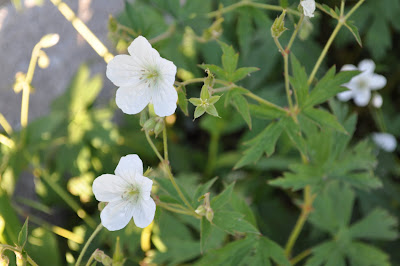 At the trail head: 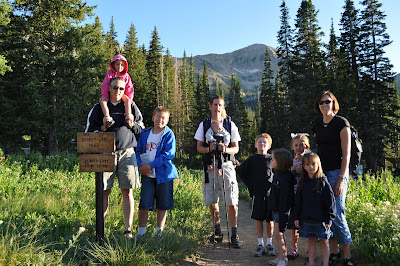 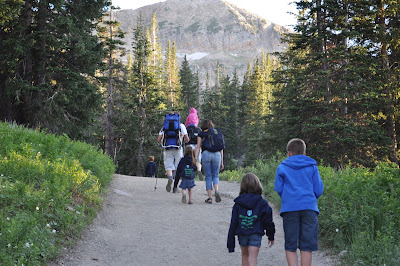 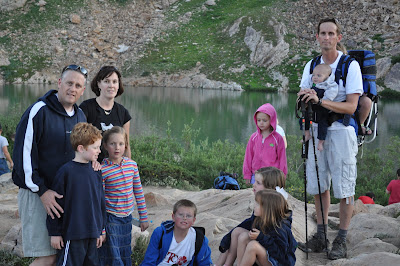 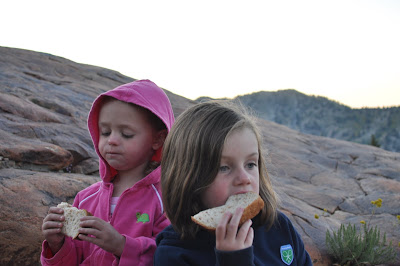 By the time we got up there the sun was down. 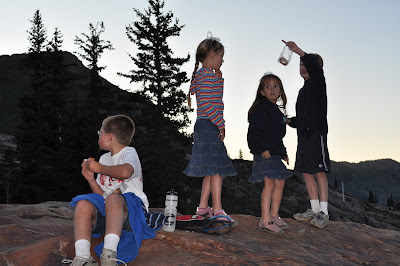 So we hurriedly lit the candles on the mangled brownies (by the way, that's a 4, not a 9) 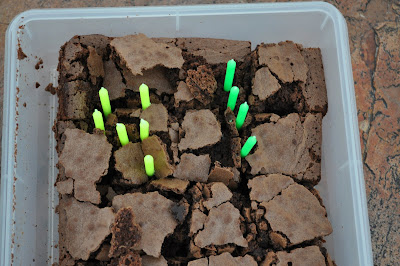 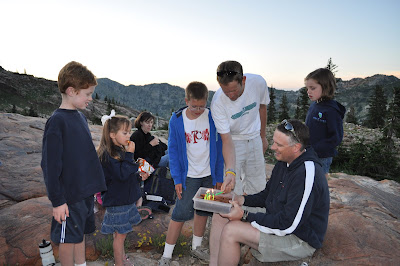 As photo nazi, I couldn't leave without a few family photos, which Shawn kindly took: 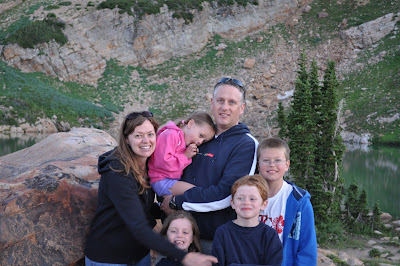 And I tortured them too: 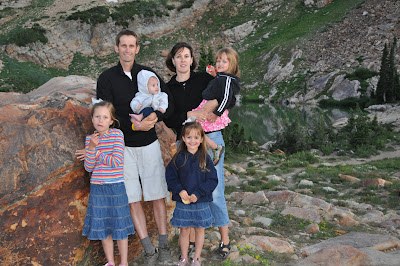 We hustled back down the mountain: 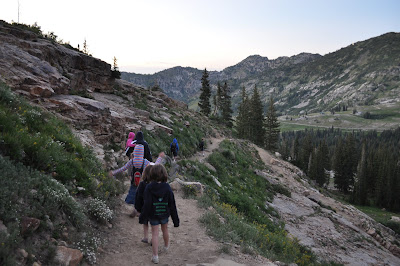 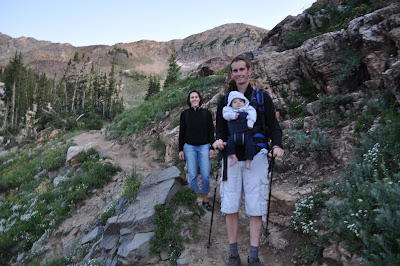 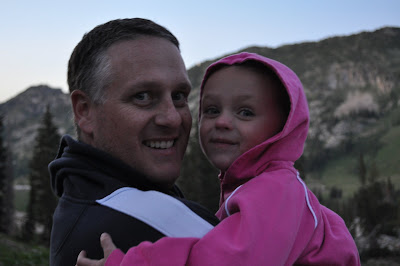 And made it to the bottom just as it was really getting dark. If only I had brought a tripod, you'd see how pretty it was. 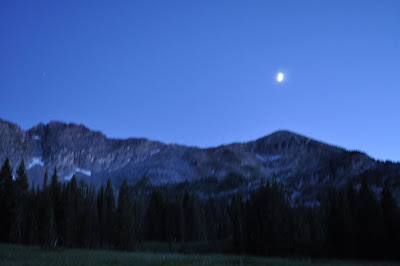 It was definitely something we need to do again, and often. Thanks for the idea Julie, and thanks for coming along Stringhams!
Posted by Michelle at 8:40 AM 4 comments:

This is so ridiculously easy I can't believe I've never done it before. I picked up a half-case of raspberries at Costco that looked great, but tasted pretty bland, so I decided to stretch my homemaking abilities and make jam. Now that I know how easy it is, our freezer will be stocked. If anyone reading this is just as clueless as I was (and I doubt that), here's the recipe:
Mix 1 1/2 cups sugar and 1 package Ball No Cook Freezer Jam Fruit Pectin together, then add 6 6-oz. containers of raspberries, crush and mix for three minutes, then let it stand for 30 minutes.
Most of the pectin boxes had recipes with triple the amount of sugar, so this isn't too sweet, but it's yummy! 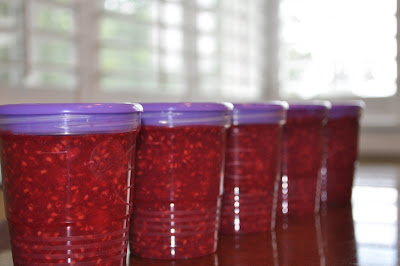 And on top of a sourdough English muffin...mmmmm! 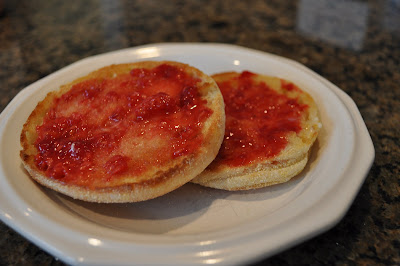 I'm finally ready to end my blogging sabbatical. We've been crazy busy, and maybe someday I'll fill in those gaps...or maybe not.

Last night Rob and Robbie went to their first scouting overnight camp. Of course I have no photos of that (it is Photo Scrooge that we're talking about here). Here at home, the other three were begging to sleep out too, so after negotiating some jobs that had to be completed, I agreed to let them sleep on the balcony, where I could supervise them from my air-conditioned room and super-comfortable bed. They did their jobs and we got them set up: 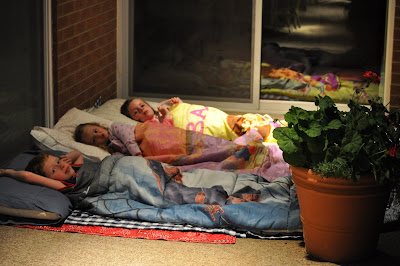 They were out there just long enough to say prayers and take a couple of photos, then I turned off the lights and went in. Ten seconds later Ainsley was in trying to turn the lights back on and I told her to close the door so the bugs wouldn't come in. "Bugs?! I don't want to get bugs on me!" from all three. Truly their mom's kids. So they ended up "camping out" on the floor in the girls room: 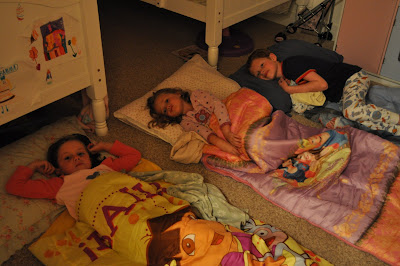 I got a couple of clean rooms and a good eight hours of sleep out of it, so that's my kind of camping.
Posted by Michelle at 10:39 PM No comments: