Scouting has been a pretty big part of our lives for the past five years. I've been a den leader for nearly five of the six years my boys were in cub scouts. This month has been extra busy, since I've been finishing up my commitment as Webelos leader, planning the joint Blue & Gold Banquet/Arrow of Light Ceremony AND I've been called as to help with advancement for the eleven year-old boy scouts. No pressure there, I'm only following in the footsteps of the great Lois Banks. Joey has been so excited to finally become a boy scout so he could earn homemade slurpees and other treats...but no, he gets me instead. She did fix them each one last slurpee on January 13th, when they turned in their reading merit badge cards. I used my phone, so it's not a great photo: 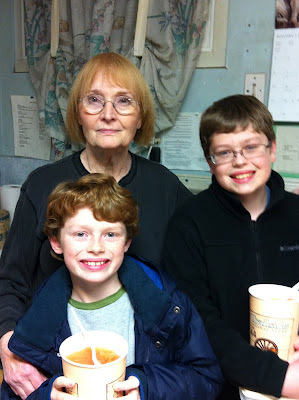 Here we are at the Court of Honor on January 18th. 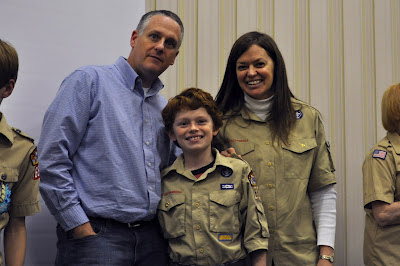 Robbie was awarded his Life, so it's Eagle project time. 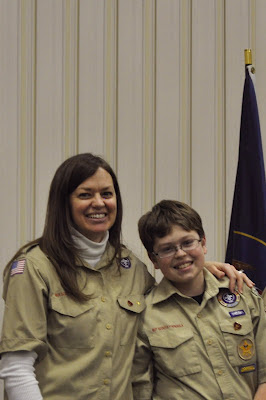 Although Joey earned his Arrow of Light back in September, the ceremony wasn't until January 19th, after most of the other Webelos had finished theirs. The pack meeting was great, we have such great leaders now I'm almost sorry to be done with cub scouts. Almost being the key word there. :) 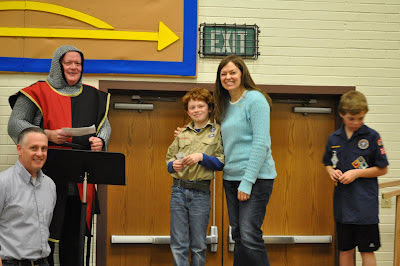 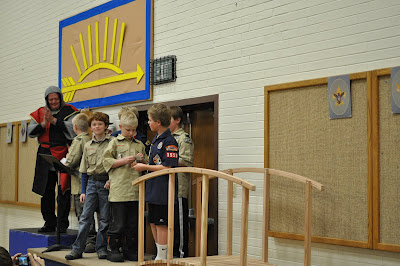 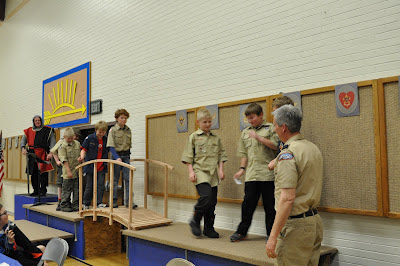 A couple of years ago I decided to take a daily photo, and have managed to post 313 daily photo entries since then. But it just isn't fitting into my life right now, so I was excited when I saw this post about a project that seems a little more doable right now. The idea is to take (or narrow down to) twelve photos every month on the 12th, ending, of course, on 12-12-12.
I immediately loved the idea, and spent some time considering what 12 photos I wanted to take this month. Twelve things for which I'm grateful? That was nixed by Rob, who didn't want to have his photo taken. Twelve resolutions? Even I'm not that crazy. Twelve favorite things? I might do that one in a future month. For this month I decided to do a photo essay about my life right now. If you read my belated November entry, and noticed the still-missing-but-soon-to-come December report, you might (correctly) assume that I've been overwhelmed. I am working on overcoming that—here's how:

I'm a "half-empty" girl by nature, but I've learned that happiness really is a choice, and a result of positive, "half-full" thinking. So for each negative, dark thought, I try to find at least a silver lining. 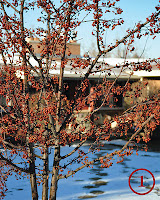 Overwhelming is the cold, gray deadness of winter. Today was an exception, actually, with beautiful blue skies. Still, I don't even start feeling warm unless it's at least 72 degrees, and going outside in the inversion is pretty much the equivalent of smoking a pack, so I have a hard time wanting to go out and enjoy the much needed sunshine. Rob tells me he recently read an article stating that there is no scientific evidence for seasonal depression. Hmm, sounds like a man saying there is no such thing as PMS to me. :) My personal experience tells me that light, warmth and color all have a major impact on my sense of well-being.
Overcoming 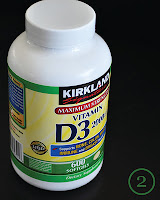 means a daily dose of Vitamin D. I do try to get outside as often as I can, but as it's dark and icy at 6:00 a.m., most of my walks get moved inside a gym on a treadmill. Again, I have only personal experience, not scientific evidence, but D3 seems to help me cope. 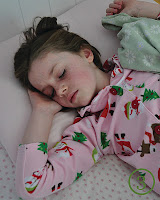 Overwhelming is illness, in its many forms. Today Ellie was home from school, after throwing up the night before. She's not one to tough it out, and spent a lot of time crying, sobbing and moaning. This isn't something that makes me (or Rob) very sympathetic, unfortunately, though it did break my heart when she told me that she thought she must have cancer and be dying. I reassured her about that, but couldn't do much about her sadness that she would not be receiving the perfect attendance award she'd hoped for this year. 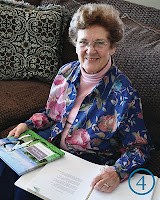 Overcoming happens when a wonderful friend brings by 7-Up for your sick child so you don't have to leave her, and then stays to visit for an hour and lifts your spirits too. My good friend Jackie Moulton saved the day today, and although she's super modest, I talked her into sharing some of her wonderful poems at book group tonight. It was such a great evening, I came home feeling completely recharged, and so grateful for beautiful writing and amazing friends. I've struggled with multiple health challenges this year, with my back and eyes, and although it stinks, it may actually be worth it just to discover how generous and kind people are. 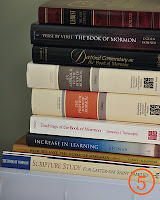 Overwhelming is being called to teach gospel doctrine. I'm intimidated by the idea of teaching people more experienced and well-read than I, and the sheer volume of available resources to help is more overwhelming than comforting. These are just a few of the books we have; there are enough online resources to keep me reading 40+ hours a week. (Speaking of online resources, I've started keeping my study notes on another blog: http://gospeldoctrinenotes.blogspot.com/). Yes, I shouldn't be complaining about feeling overwhelmed when I make work for myself. I figure I'm preparing anyway, so if it can help anyone else, great. Ideally I'll start posting my thoughts before the lesson, not after. :) 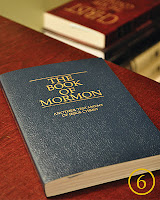 Overcoming is the realization that this is really the only essential reading. Reading the Book of Mormon has been one of the best tools I've discovered for coping with feelings of being overwhelmed. I am grateful to have a calling that motivates me to do this more regularly and with greater intensity. 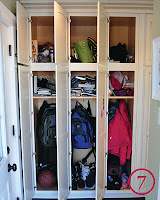 Overwhelming is what I think when I consider the amount of cleaning and organizing that need to happen around here. I could have taken any number of photos for this—the piles of laundry waiting to be washed, folded and put away, or the messy storage room. The lockers seemed least objectionable, even though Rob had to warn Joey not to put an important assignment in his locker, so it wouldn't be lost in "the vortex of crap." It makes me tired just thinking about it. 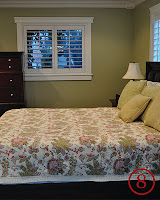 Overcoming, for me, means doing a least a few household chores consistently. Starting the day with our bed made always makes me feel better, and Rob too, since he always makes a point of thanking me when I do it. I like clean surfaces, even if I know that a "vortex of crap" is lurking behind closed doors. One other mind trick that helps me when I'm overwhelmed with the mundane repetitiveness of it all, is to focus on the person (or people) I'm serving. Thinking of Ainsley while I fold her tiny, fancy, girly clothes always makes me smile. 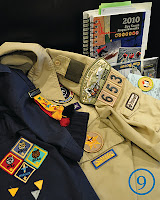 Overwhelming: trying to help not just my own two boys, but a group of Webelos, and now 11 year-old boy scouts earn their rank advancements and merit badges. Anyone who read my Ode to Lois Banks will know what kind of standard I'm trying to live up to. It's a pretty big deal. Overwhelming pretty much sums it up. 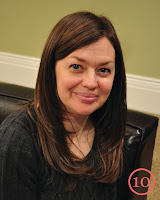 Overcoming. Here's the thing though. I love this quote by Kahlil Gibran, "Beauty is not in the face; beauty is a light in the heart." I really want to be someone who makes a difference in other people's lives, the way I've seen Lois make a difference in Robbie's life. I don't think this is something that just happens without any effort. I hope I will make the most of this opportunity. 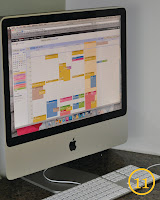 Overwhelming is feeling over-scheduled. My schedule is pretty relaxed compared to others. I know this, but also know myself well enough to know that I need down-time almost as much as I need clean counters. :) I want the kids to have opportunities to develop talents and discipline, so we're involved in piano, scouting, sports, ballet, sewing lessons, etc. I want to be involved in their education, and so I volunteer in their classrooms and help in the PTA. Yet I hate feeling like I don't have time to read, which restores me. 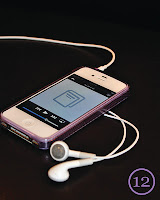 Overcoming: Although I love every opportunity to sit down and turn actual pages, when there just isn't time, I listen to audiobooks. There are many books that I actually prefer the audio version. The Harry Potter series, narrated by Jim Dale, is amazing; and The Help and Ender's Game were both better listening than reading. Today I finished a spy novel that Rob recommended, The Kill Artist, by Daniel Silva. Not very high-brow, just some suspense. Sometimes that's exactly what I need in my upward-spiral efforts. I almost never watch TV, but have just discovered the BBC's Downton Abbey, so I can add that to my guilty-pleasure escapism.
Whew. That's a long, semi-confessional post. One written mostly for my kids, since I hope it's a lesson they'll learn much earlier than I did. Anyone have any good ideas for next's month's twelve photos?
Posted by Michelle at 11:37 PM 1 comment: 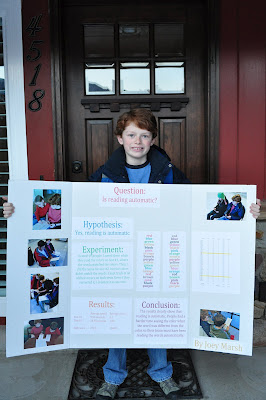 Joey is our award-winner. He did another great project this year, timing 50 different people as they named two sets of colors, one with the name written in the same color ink, and one with the colors mixed. It's based on an phenomenon known as the Stroop Effect. However, at the awards ceremony the judges told him that he didn't receive Best-in-show because he got it last year, and they wanted someone else to have a turn. Lame. Not that I wanted to go the next level, I think it's a major pain. Oh well, great work Joey!
Posted by Michelle at 8:56 PM No comments:

There's a new blog called Shelf Actualization that I love. I really liked this post. It motivated me to add up my reading totals for the year (thank goodness for goodreads):

Hard to pick my top ten, but my some of my favorites were:

The Killer Angels by Michael Shaara

The Whistling Season by Ivan Doig

City of Thieves by David Benioff

A Separate Peace by John Knowles

Rawhide Down by Del Quentin Wilber

The Trouble with Poetry by Billy Collins

Increase in Learning by David A. Bednar

and the Harry Potter series on audio

My list isn't 100% accurate, I'm missing all the books I read in January somehow, and doubtless a few more that I forgot to record. Still, it was fun to see the breakdown.

I decided I could probably improve my shelf this year, and even came up with an idea for a new blog, readthe100.com, to share the adventure of reading acknowledged literature. I flaked out on this (I can't even keep up with the blogs I'm writing), but a far better writer than I took on the challenge, so you should check it out.