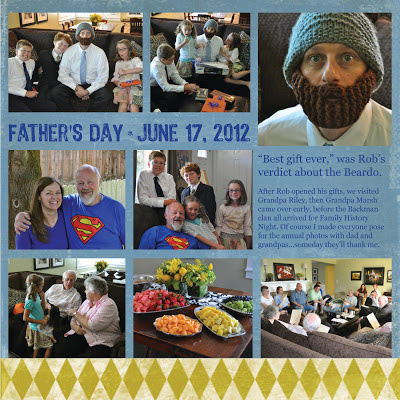 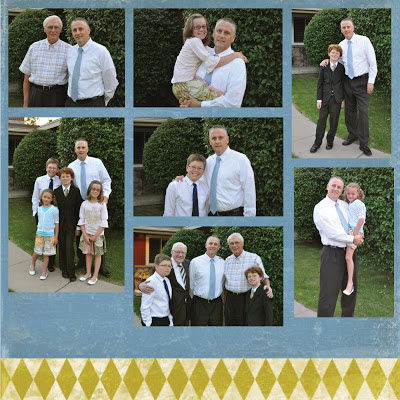 Posted by Michelle at 9:00 PM No comments:

Take twelve on the twelfth worked out well in June—it was Ralph & Judy's 50th wedding anniversary! 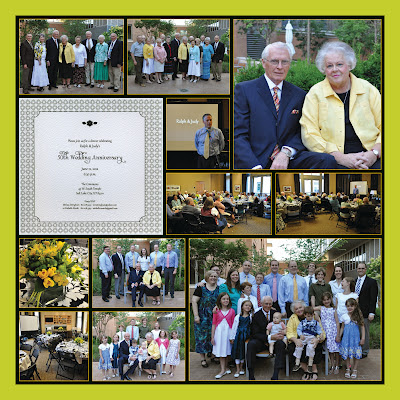 We had tried to figure out what we were doing to celebrate this milestone for almost a year, and finally in May got enough feedback to know that they did not want a big party with everyone they knew invited, just something with their kids, grandkids, siblings and parents. It wasn't much time, but we got to work and made it happen. It turned out even better than we could have hoped.

Here are the details:

There were 40 of us, including the guests-of-honor. A few couldn't make travel arrangements with the short notice we gave, but Ralph & Judy were thrilled to have Matt & Colin there from Chicago, and Rich all the way from Atlanta. 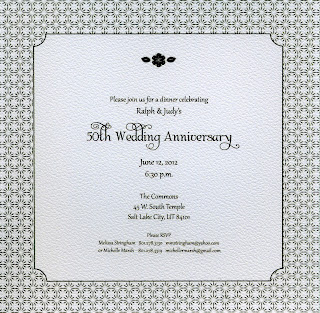 We held it in the common room at City Creek, which turned out great. Melissa and I found a couple of these table clothes right away, and then spent hours looking for more so we'd have enough. I think it turned out beautifully. 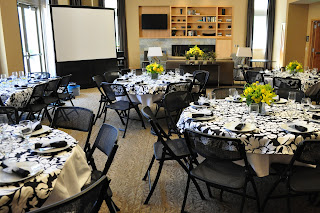 I LOVED the flower arrangements—my friend Christianne, owner of Urban Flowers, did them, and they were spectacular. 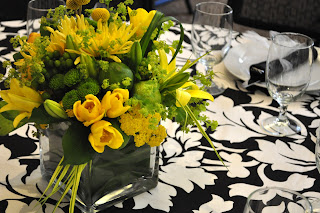 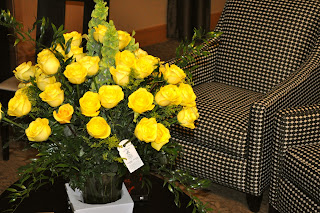 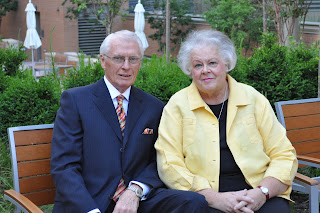 All of Ralph's siblings were there except Grant and Edie (previous commitment). They all traveled from St. George for the event. 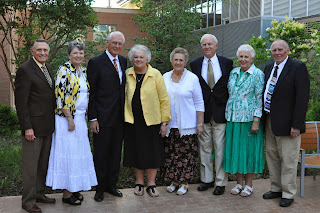 Everyone (except Carl) from the Backman clan: 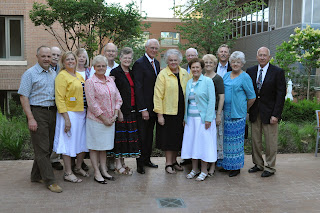 All of their kids were there except Joe. We really need to have one of those cardboard cutout stand-ins made. :) 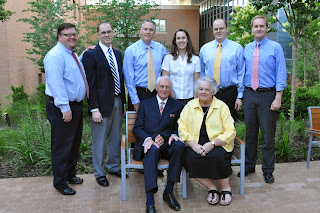 Here are ten of the fifteen grandchildren. 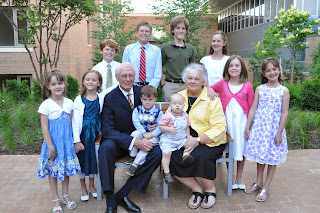 I feel lucky to be a part of this family. 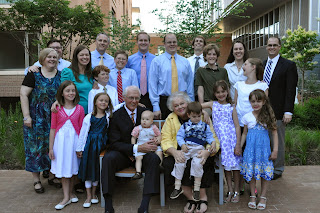 After torturing everyone with my camera, we sat down for dinner. It was catered by Temple Square Hospitality, and although the presentation wasn't exactly what I'd envisioned, the food was delicious. 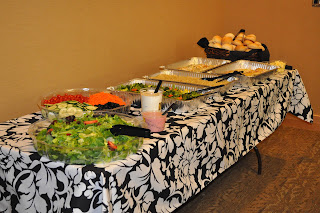 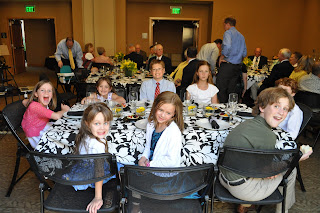 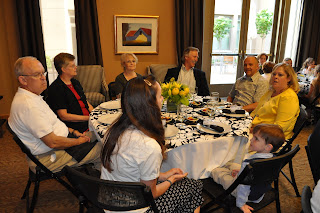 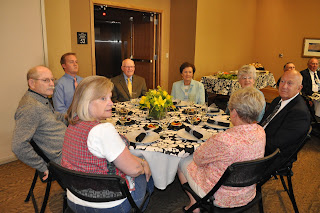 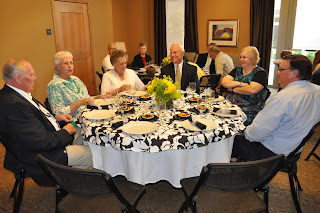 After dinner, each of the children paid tribute to their parents. Because Ralph has written and read a poem for each of them at their wedding dinners, we thought a few poems to reciprocate would be appropriate. Push play to hear Rob's:

Unfortunately, I forgot to upload the photos on my memory card on my camera before we went (remember all those end-of-school photos?) so after his poem I had very little memory left, and did not get video of anyone else. It's a shame. Melissa, Rich and Matt also wrote funny-yet-touching poems plus some added remarks, Dan included Joe's tribute in with his, and Jake had a pretty good argument for not writing a poem, since Ralph hasn't written one for him yet. :) He had us all choked up with his tribute though. 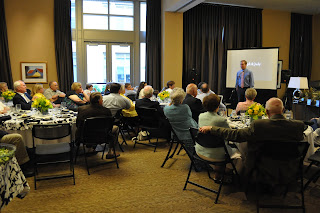 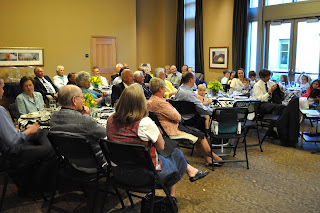 We ended with a slideshow that I made over the previous three weeks. Ainsley told Judy, "Oh grandma, you're going to love it, my mom has given her whole life for it." She's not at all dramatic. :) I'm happy with the way it turned out—just over 31 minutes long, the first half is a When Harry Met Sally type interview, and the second half has 343 photos spanning their lives, most of which I had to scan and edit. I had been wanting to see family photos for years, and finally got my wish! It was well worth the time and effort. I wish I could get it posted, but apparently even the smallest size is too big to post.

Ralph and Judy got the last word, thanking everyone there and sharing their love. 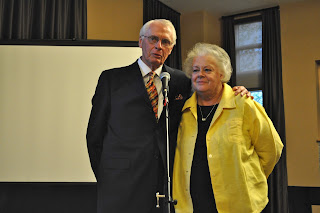 Ah, the end of the school year. This is where the insanity that led to my nearly four-month blogging break began. So many activities that something had to give. We gave up a clean house, regular family meals, exercise, early bedtimes...I may have been able to squeeze a few posts in if only I'd been willing to let go a little on personal hygiene, but even I draw the line somewhere. So photo scrooges beware, this is a photo heavy catch-up post.

We managed to fit in a couple of games with our awesome neighbors—this year we tried kickball instead of softball. They could say jousting, and we'd show up, just because they're all so awesome.


I helped with a water polo team dinner, a new experience for me to try to feed that many hungry teenagers.

The first group of kids lined up to do theirs in the classroom, with the other kindergartners sitting on the rug in front of them. Near the end of the performance, one of the little girls standing began to projectile vomit. Guess where Ainsley was sitting? Yep, right in front of her. She was covered, but refused to leave before performing her part. The show must go on...


Robbie performed with the percussion ensemble at the Junior High, and it was awesome. I discovered that he was a soloist when I saw it listed on the program, and had to text Rob to come and bring the other kids. Teenagers! He did well, in spite of his cast.


Not really an end-of-school activity, but I had to include this photo of us cleaning the church because it's a classic. Reminds me of a church dinner we were at: Joey started freaking out because Rob got mad at him for taking multiple desserts before everyone had been served, and a nice ward member who witnessed the meltdown said, "Oh good, I thought your kids weren't normal, now I can see that they are." Yeah, that's it, normal.

Rob, planting the flowers, because that was something I was willing to let go.

Another band concert. Joey did an amazing job, especially considering how little he practiced his clarinet. :)


We are so lucky and grateful to have a great-grandma who is healthy and supportive.


The water polo awards dinner. Robbie and Jonas got a special mention as the only seventh-graders on the team.


Joey, as an Idaho Spud in the 6th grade 50 States assembly.


The junior high awards night—there are some AMAZING kids there! I'm glad that Robbie is one of them.


Joey, after a poetry reading with one of his best friends.


Rob will be shocked that I posted this photo, which is not the least-flattering photo that has ever been taken of me, but is probably the least flattering photo I've ever posted. It's because as a scout leader I had to help with the court of honor, and gave the picture-taking duty to Ellie. She didn't take one of just Joey, but I don't want to skip his big achievement—we finally made it through the 30 days of exercises, so he earned his Tenderfoot!


Drumroll here, for the much anticipated last day of school. Yay! Here's Ellie:


He came home with what appeared to be an arm tattoo. He explained that he didn't want to ruin his shirt by having his classmates sign it.


Robbie not only survived his first year of junior high, he loved it.


We celebrated by making homemade pizzas.


Fun, but a lot of work and a big mess to clean up. Next year I need to remember that and we can just go out for dinner...