For the past few years our New Year's Eve tradition has been easy—we just show up at the Stringham's for fondue and fun. This year I'm in Young Women's and we had a pizza and root beer party with the YM at church, while Rob went to the Utah v. Gonzaga basketball game, so we missed the party (not that we've ever stayed 'til midnight—we're lame that way). The kids all got to come to the ward with me, and they were in seventh heaven. Afterward we came home and watched an iMovie of about 780 photos plus short video clips from 2008. I will never scrapbook again! (It's been so long I may have forgotten how anyway...) It was really fun to review our year—even Photo Scrooge made it through without too many complaints. I'm hoping this is the start of a new tradition on New Year's Eve. The kids want to make root beer floats part of the tradition. Which will make it easy for me to get a jump-start on my perpetual resolution to lose weight in January, since root beer floats don't tempt me in the least.
Happy New Year!
Posted by Michelle at 10:43 PM No comments: 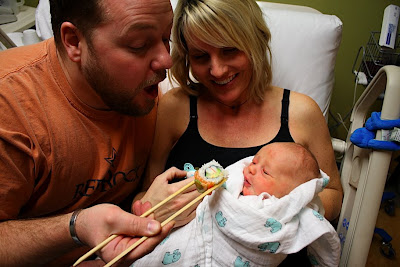 Welcome to the family. Sushi? Give it to Mikey...he'll eat anything.
Posted by Michelle at 10:28 AM No comments: 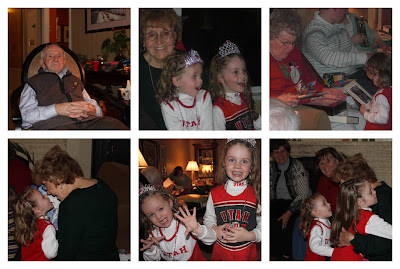 What could possibly be better than being princess-cheerleaders?!!! Great-grandma Clayton knows how to make these girls happy!
Posted by Michelle at 10:01 PM No comments:

Traditions at the Backman family christmas party include cooked-to-death beef, Ginny's rainbow jello, enacting the nativity, receiving books as gifts and Grandpa sharing his testimony. This year Mary and Joseph both had red hair, and a couple of the angels were cheering for the U. 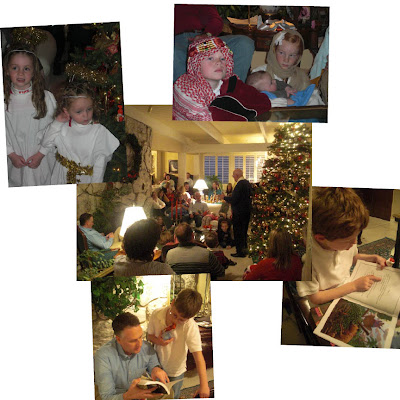 Posted by Michelle at 9:49 PM No comments: 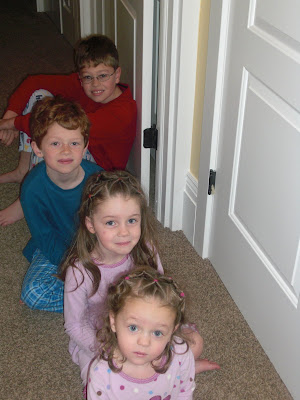 We had a great christmas morning. I mostly shot video, so I don't have many photos, but we had my mom & dad and grandma over to watch the kids open presents, and Rob's parents and Jake joined us for Rob's famous ebleskiver breakfast. There were only minor injuries playing the new air hockey table. Good times. 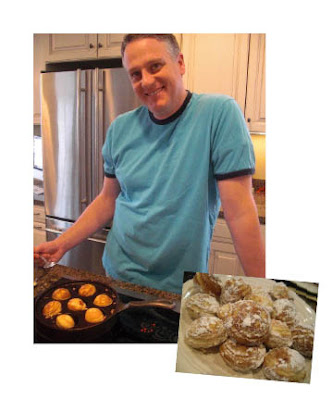 Posted by Michelle at 9:12 PM No comments: 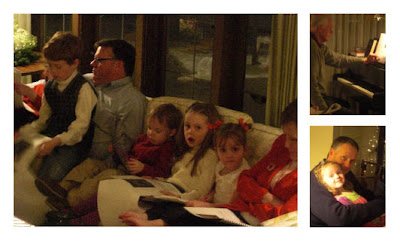 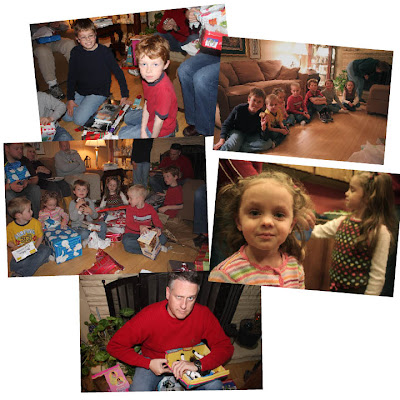 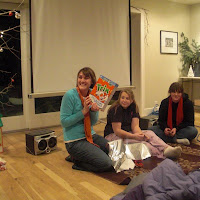 You know you're old when a sleepover doesn't sound like fun. Yet, except for the lack of sleep, the YW christmas party was fun. We had to cancel our trip downtown to see the lights because of the massive snowstorm, but we had a yummy dinner, exchanged white elephant gifts, played "The Sassy Experience" and watched an awesome slideshow/movie summarizing the year. 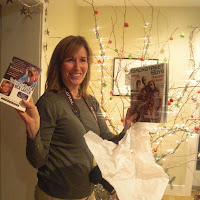 I got to go home and sleep in my own bed for a few hours before heading back for a waffle breakfast. We don't have many young women, but they are stellar. And I feel so lucky to work with some of my favorite people in the ward.
Posted by Michelle at 2:10 PM No comments:

Photo (and holiday) Scrooge thinks this school time should be spent learning math and science, but the kids love it.
Posted by Michelle at 6:31 PM No comments:

We usually celebrate Riley family birthdays on the second Sunday of each month, but we've skipped a couple of months, so Ainsley is finally getting her party. She didn't seem to mind extending the fun into December.
Posted by Michelle at 9:54 PM No comments: 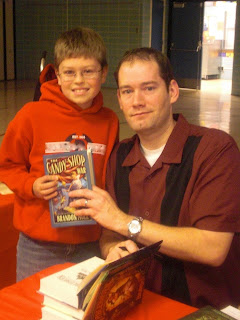 Robbie was thrilled last week when he was chosen to be the student who introduced author Brandon Mull at today's assembly. Robbie devoured the Fablehaven series and The Candy Shop War and told me I'd love it too—he was right. I read the Fablehaven books this past week, expecting a mediocre Harry Potter knockoff, but after the first book I was hooked. The plot kept me turning pages, the dialogue kept me smiling and the characters came to life. And I loved the discussion questions at the end—there are some good issues to get kids (and adults) thinking and talking. Yep, Robbie takes after me...he's a book nerd. Now our only dilemna is who gets to read book four first!
Posted by Michelle at 10:27 AM 1 comment:

I've posted this recipe already, but since I've decided to change my format to 6x6" (so I can either make cards or put recipes in a smaller binder), I'm posting it again. 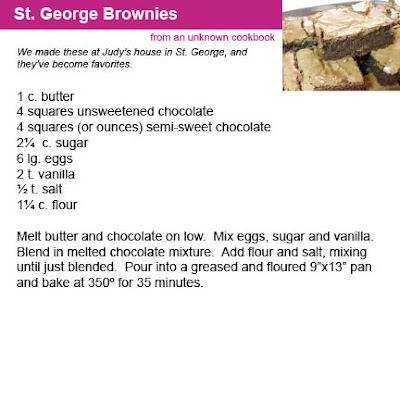 I made these last night for Family Home Evening, and they served as inspiration for Robbie's homework assignment to write a short story. Check it out, it's awesome:

What if my mom’s brownies gave you powers?
By Robbie Marsh
“Brownies!” Joey shouted.
“Yippie!” I exclaimed. They were fresh out of the oven. I immediately asked for one. Joey wanted a brownie too. They had a mouth-watering smell, and they tasted scrumptious. All I could do was think of the taste. Just looking at these brownies makes you feel like you’re starving. I closed my eyes, thinking of the brownies. Why, they were so good, they could make you fly or…
The moment I thought of ‘fly’ I hit my head on something. I opened my eyes wondering were I was. I looked down. There, was the kitchen, all of it. Maybe I was imagining things, but it was a birds-eye view. I could see the oven, sink, stove, pantry, dishwasher, and best of all, the brownie platter. I could see Joey’s fingers sparkle a flash. I instantly knew it was lightning. I thought a moment, and my eyes grew wide. I had been thinking about what Joey just did. I wondered if I could fly at…BONK! I felt it immediately. The wall. Sizzle. It rushed past me. Another miss.
“Stop it Joey!” I called to him.
“No! I’m a super-villain now, and you can’t stop me from taking over the world!” he shouted back. He didn’t know yet. I had the element of surprise on my side. Sure, he can throw lightning. I just have to fly at the speed of light to save Mom and get back here. As soon as you can blink I’d accomplished this and had a plan.
“Why don’t you eat another brownie to become stronger Joey?” I asked
“Good point” he said. So he ate another brownie, and evilly laughed. He tried to hit me with lightning but he couldn’t. I took the last brownie so he wouldn’t get his power again. I lost mine. So if you ever ask for a brownie, make sure my Mom didn’t bake it.

Joey was initially quite upset at being cast as the super-villian, but since then he has embraced this role, and he really does want to rule the world. ;)
Posted by Michelle at 9:30 PM 1 comment: 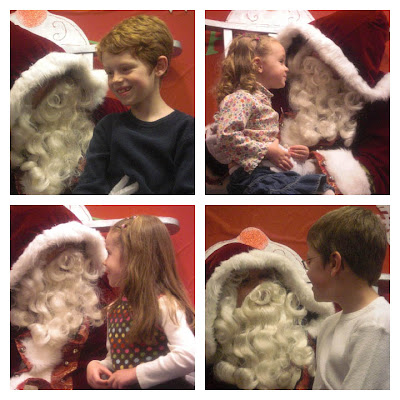 Rob had class, so it was just me and the kids at the ward christmas breakfast. They had a great family bluegrass band for the entertainment, but Santa was the highlight for the kids. This may be the last year that Robbie will fit on his lap (or want to sit on it).
Posted by Michelle at 5:31 PM No comments:

Beware of the doghouse

Photo Scrooge apparantly has a great christmas present for me, even though the new kitchen was supposed to be it for the next five years. He knows I'm not into jewelry, so maybe it's something "truly nice, like a gym membership." 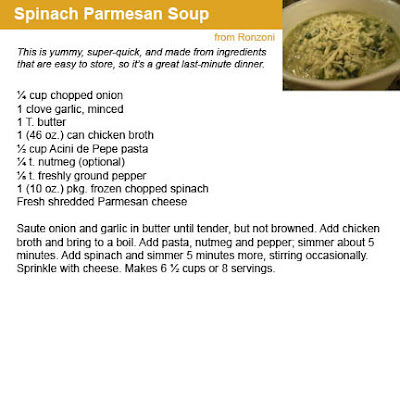 Last night I took this soup to Enrichment, and had several requests for the recipe, so I'm ending my long break from recipe posts (and from cooking, for that matter). I love this soup. It is delicious, and sophisticated enough to serve company, but so easy I'll even make it for lunch on a cold day. Don't cheat and try to fix it with dried onions or garlic or "fake" Parmesan cheese. I recommend the fresh shredded Parmigiano Reggiano from Costco. Mmmm!
Posted by Michelle at 1:47 PM No comments: 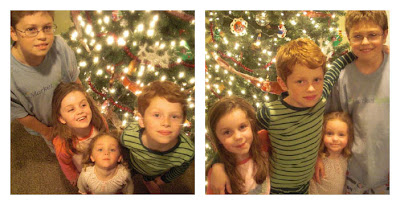 Posted by Michelle at 9:36 PM No comments: