Ellie still didn't feel great, so instead of heading out to see Houston before going to the airport, we stuck around the hotel until checkout time at noon, then had a long lunch at Pappasito's in Humble, near the airport (just okay, not the awesome Tex Mex we expected in Texas!) and sat around at the airport for a few hours:


Disney was right, it is, in fact, a small, small world. Robbie's EFY counselor and his family were on our flight going home. His name is Corbin, but they called him Skip. And his nickname for Robbie was Mick Jagger, which is hilarious.

We were excited to check out Johnson Space Center on our only full day in Houston. Unfortunately, so were thousands of other people. In spite of the crowds, it was pretty cool. We only took one of the four available tram tours because even though we mocked the local news for their "winter conditions" alert, we actually were totally unprepared for the cold wind as we left the museum and went to mission control. We saw the historic version, a re-creation of the room that supported the Apollo missions, including the famous Apollo 11 landing on the moon. The other available tours were to the current mission control room, the astronaut training center, and the swimming pool training facility (which is only open once a year, over Christmas break). But between the cold and the super long lines, we opted to check out other parts of the space center.

Everyone got a cool NASA t-shirt souvenir. We had planned on meeting Claudia and her family for dinner, but Ellie started feeling sick just as we were ready to leave and had to stay within bathroom distance. :( Less than optimal for the plane ride home.

We disembarked from our cruise on Sunday morning, and had planned on finding a church, but I was still not feeling great and we decided to spend the afternoon visiting my friend Claudia and her family in Katy, about an hour away from our hotel in Clear Lake. We had such a great time with them, I'm kicking myself for only taking one photo. We talked and played Pit, and Catch-Phrase, and Pictionary (in Spanish!), and we all tried Samuel's hover board. Rob and I narrowly avoided becoming one of those hover board fail hashtag people, and the kids picked it up pretty quickly and all now want one. We all remembered them telling us that fried ants are a Colombian delicacy, and this trip we all had the chance to try them...they tasted a bit like popcorn, but crunchier. We seriously had the best time and stayed way later than we'd planned, but just didn't want to leave! Una familia muy hermosa: Andres Sanchez, Claudia Lizcano, Samuel (14), Isabella (12) and Lucas (6). 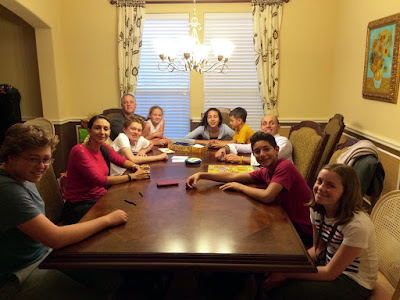 Our first port was Cozumel. I had originally booked the tour to Chichen Itza through the cruise, but changed it after realizing the travel time there and back would be most of our day. Instead, I booked a tour to Tulum with Alma's LDS Tours after several people recommended them. It was a good thing we switched...we ended up getting there a couple of hours later than expected, and the ship's tours were cancelled. Luckily we caught the ferry from Cozumel to Playa Del Carmen just as it was leaving. 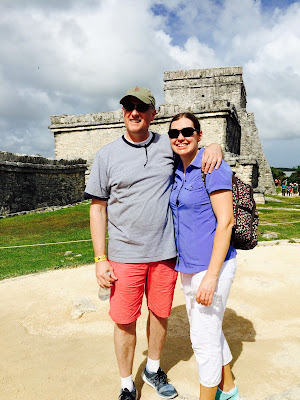 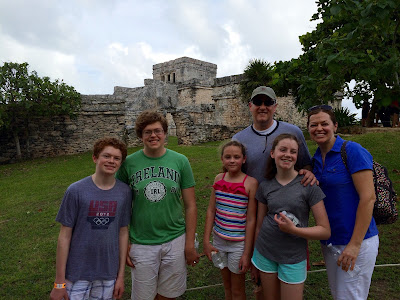 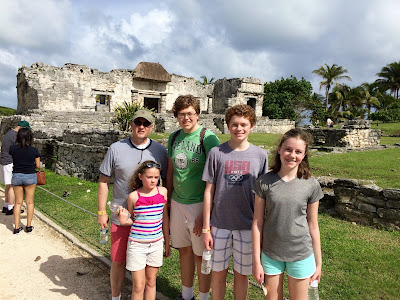 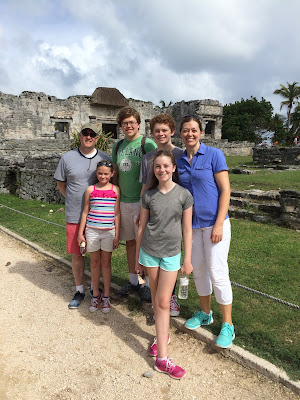 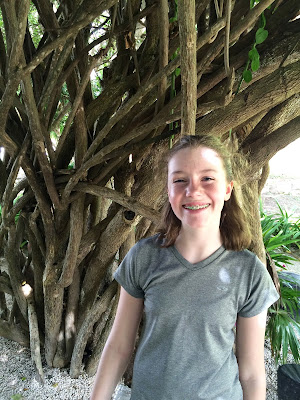 It was warm. We had to remind ourselves not to complain about the heat, since that was exactly what we'd hoped for. Probably only in the 80's, but the humidity! At the end of our tour, we were provided with the authentic Mexican lunch of Subway sandwiches and returned to Playa Del Carmen to catch the ferry so we wouldn't miss the ship's sail time. 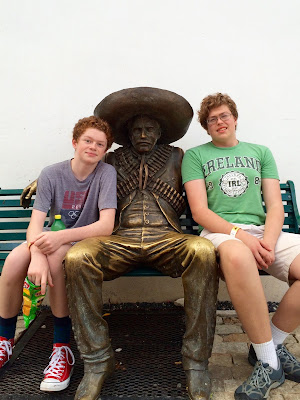 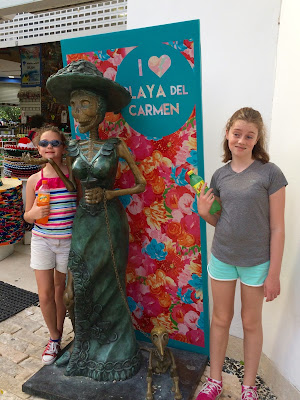 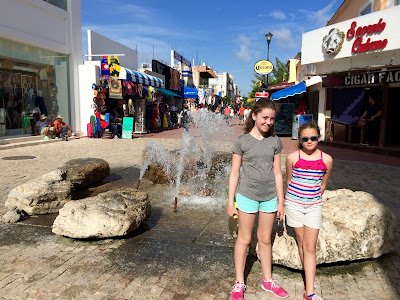 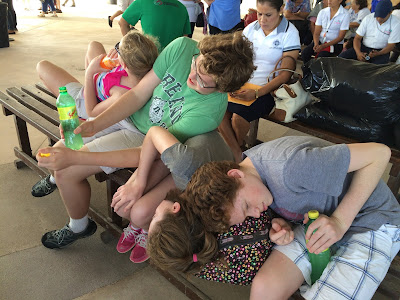 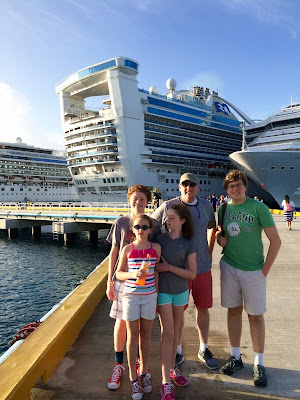 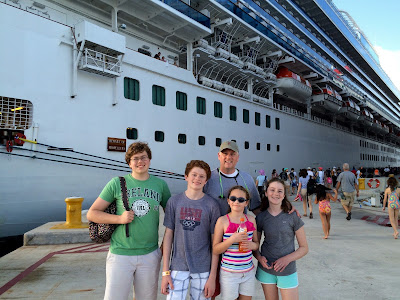 It turns out we didn't need to rush. There was one passenger who didn't make it back on time, and "in the spirit of Christmas" the captain waited for him almost two hours. Still, glad we didn't have that stress. A fun day!
Posted by Michelle at 11:30 PM No comments:

Our ship had to be deep sanitized after the previous voyage, after an outbreak of norovirus, so it was late afternoon by the time we boarded. 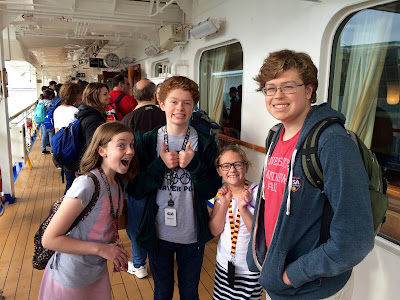 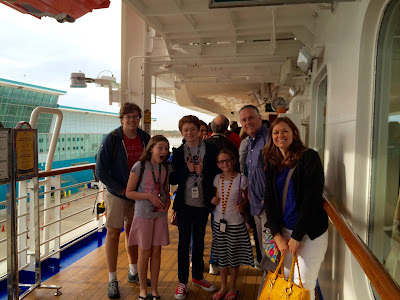 Touch Down in Houston

Friday was a mad rush to get everyone packed and ready to go...I only got a few hours of sleep, and when Rob checked our flight info, he realized that I'd gotten the time wrong by an hour, so we cut it pretty close leaving for the Salt Lake airport at 7:30. But we made it, and landed in Houston around 2:00 p.m. We stayed at a hotel near the airport and I was thrilled to have a nice relaxing day, especially since my cold seemed to be getting worse. 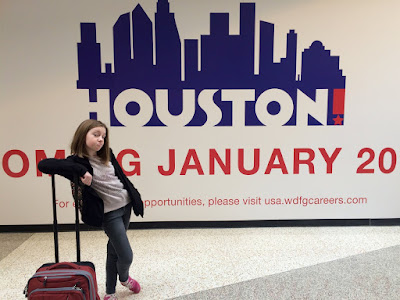 We walked to a strip mall nearby and had some decent tacos and falafel. 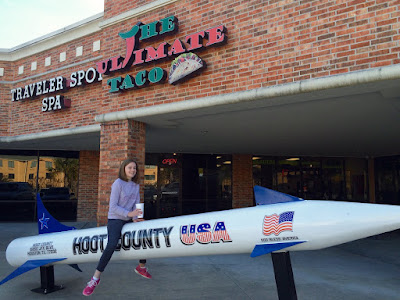 And the kids went for a "polar bear plunge." The hotel pool was NOT heated, but that didn't stop them, crazy kids. 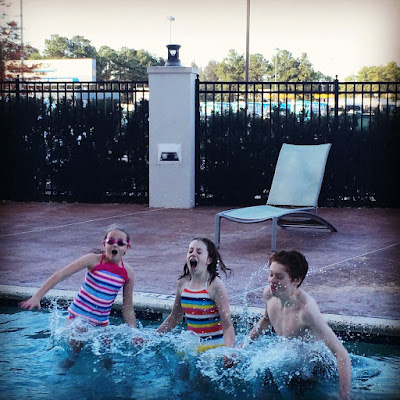 Excited to begin another adventure together.

Fun fact (sarcasm font): I somehow forgot that I had booked this hotel, and booked THREE rooms that sleep six each. The early bird non-refundable rate, of course. So much for my spa budget onboard.
Posted by Michelle at 10:30 PM No comments: