A Walk in Paris

Ainsley here! I am going to talk about a walk that me and my dad went on. We went to a church and on the doors it has all ten commandments.  Five on each side. Here I am standing by one of the huge doors. 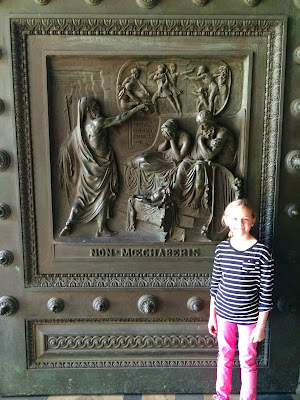 Here I am in front of the church, it's called La Madeleine. 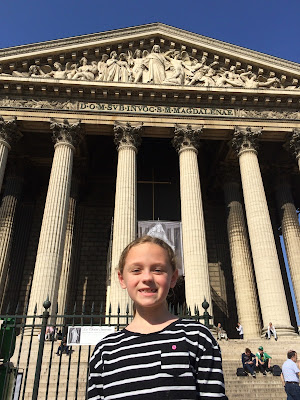 One of the sides of the church. 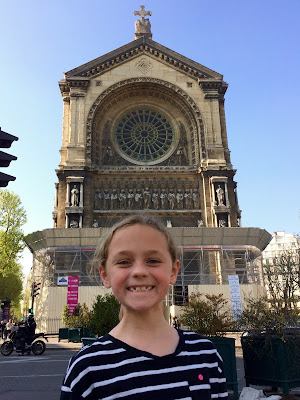 Me posing with this lovely statue. 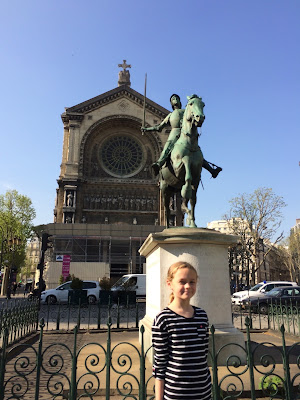 On top of a building was a stature of something. I can't remember what this is. 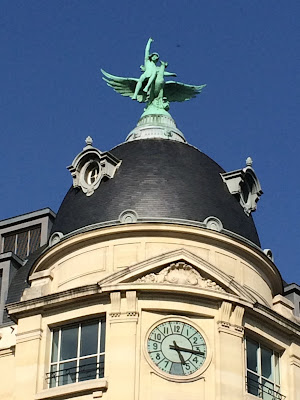 And we finally (after a LONG walk) we found macaroons. If you've never had a macaroon, you don't know what you're missing. They are made with two gourmet cookies, with gourmet frosting in the middle. There are many different flavors, like strawberry, lemon, chocolate, mango, lime, apple...the list goes on. They are light and soft, but kind of crunchy. It's worth a trip to Paris just for a good macaroon. Walking in Paris is the best!! 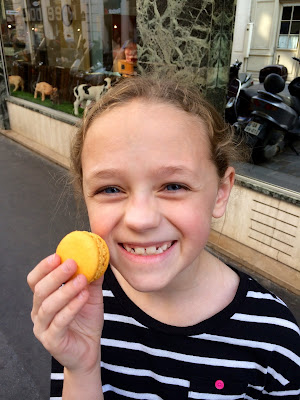 After not being able to make our traditional valentine day crêpes in Fitou, I promised to make it happen for general conference even if I had to buy a pan. We were able to stream the Saturday session while we ate. Les Crêpes taste even better in Paris! 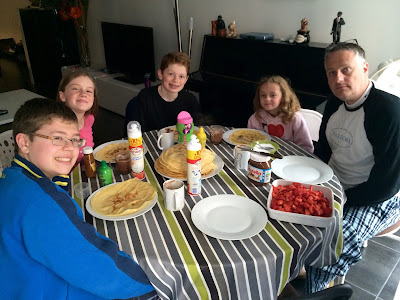 First full day in Paris, it was time to go out and explore. So while everyone else was sleeping, I got up for a run, if by "a run" you mean sort of jogging toward the Seine then wandering a bit to have a look around. And that is exactly how I mean it.

Which reminds me of a joke.

Pierre: Jacques! A man just jumped off the Pont Neuf!
Jacques: What? He must be in Seine.

Back to my wandering.

Since Paris was totally unfamiliar at this point, I was just having a look around, but if I saw something that looked interesting, I took a snapshot. Which is why I took this picture of a government building. Actually, given that there are so many government buildings in Paris, it's a good bet that most of my pictures fit that category. 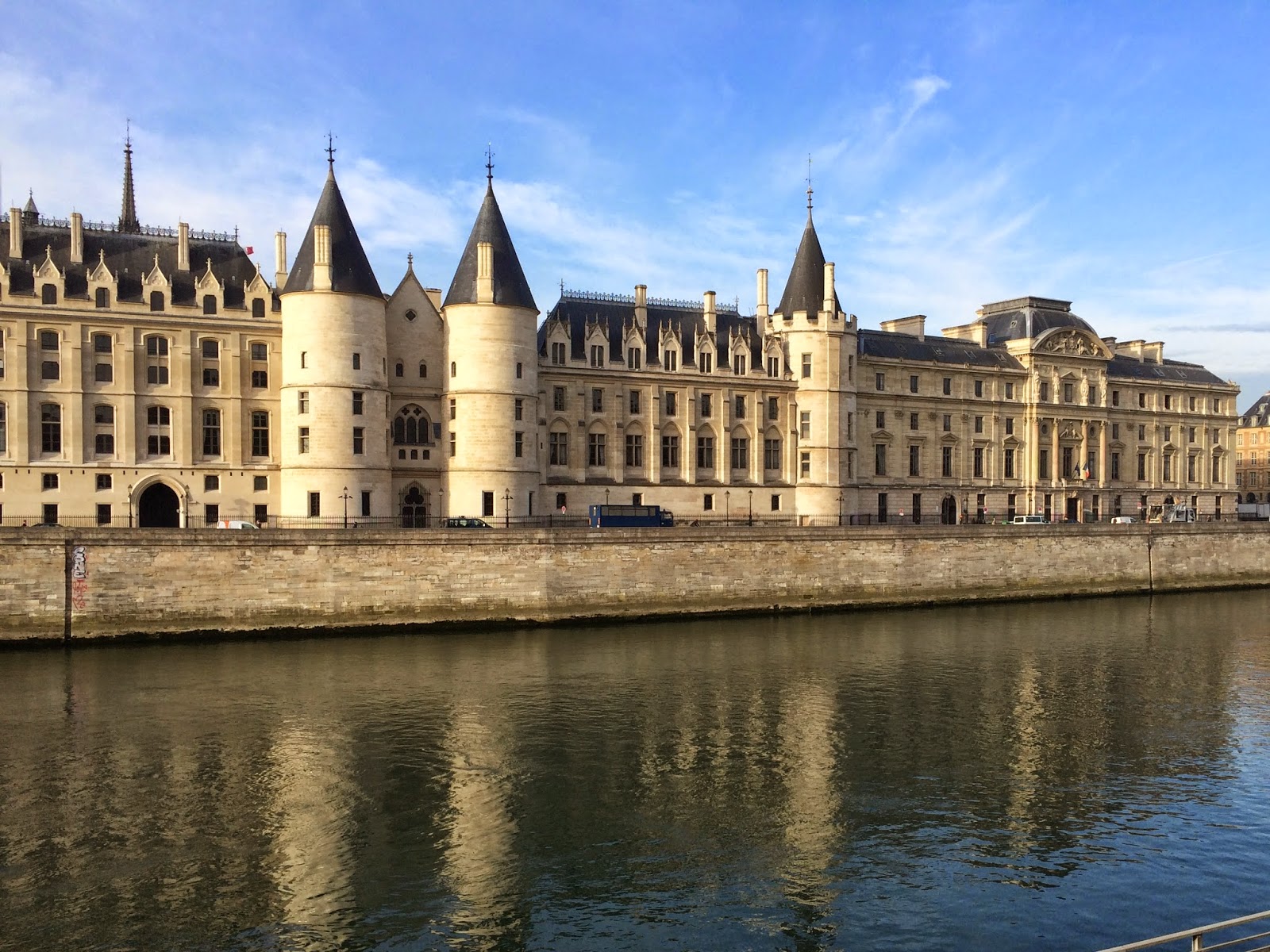 Fans of Sex in the City will recognize this bridge from an episode where the Sarah Jessica Parker character (I've never actually seen the show) and her partner attached a lock to a bridge, then throw the key in the river. What? That's in Seine! Apparently the lock on a bridge is a thing. Which is why there are thousands of them on the Pont des Arts: 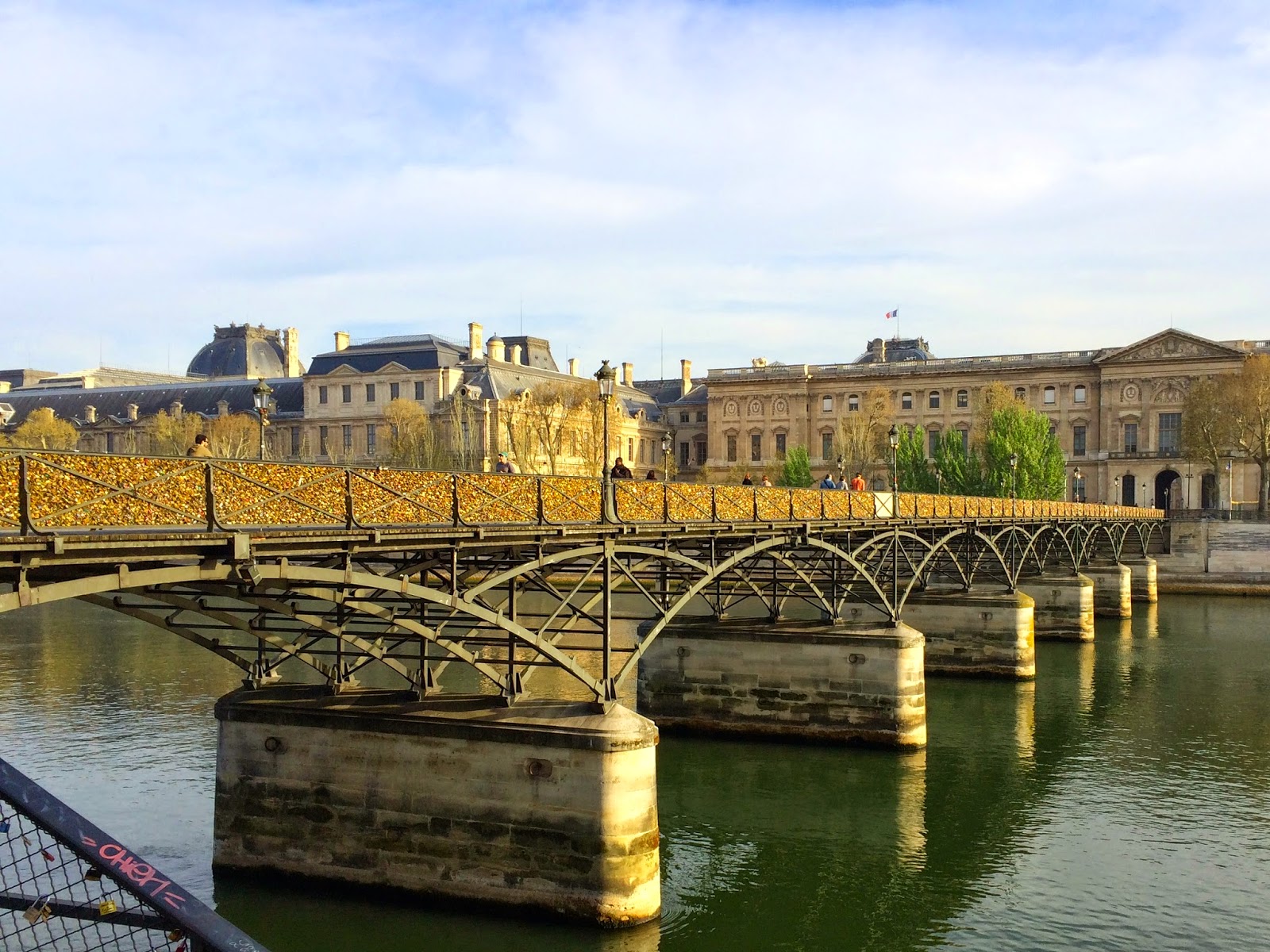 If you can ignore the fact that the extra weight is causing damage to the bridge (which, conveniently, I can) it's a pretty cool site to see. A close up: 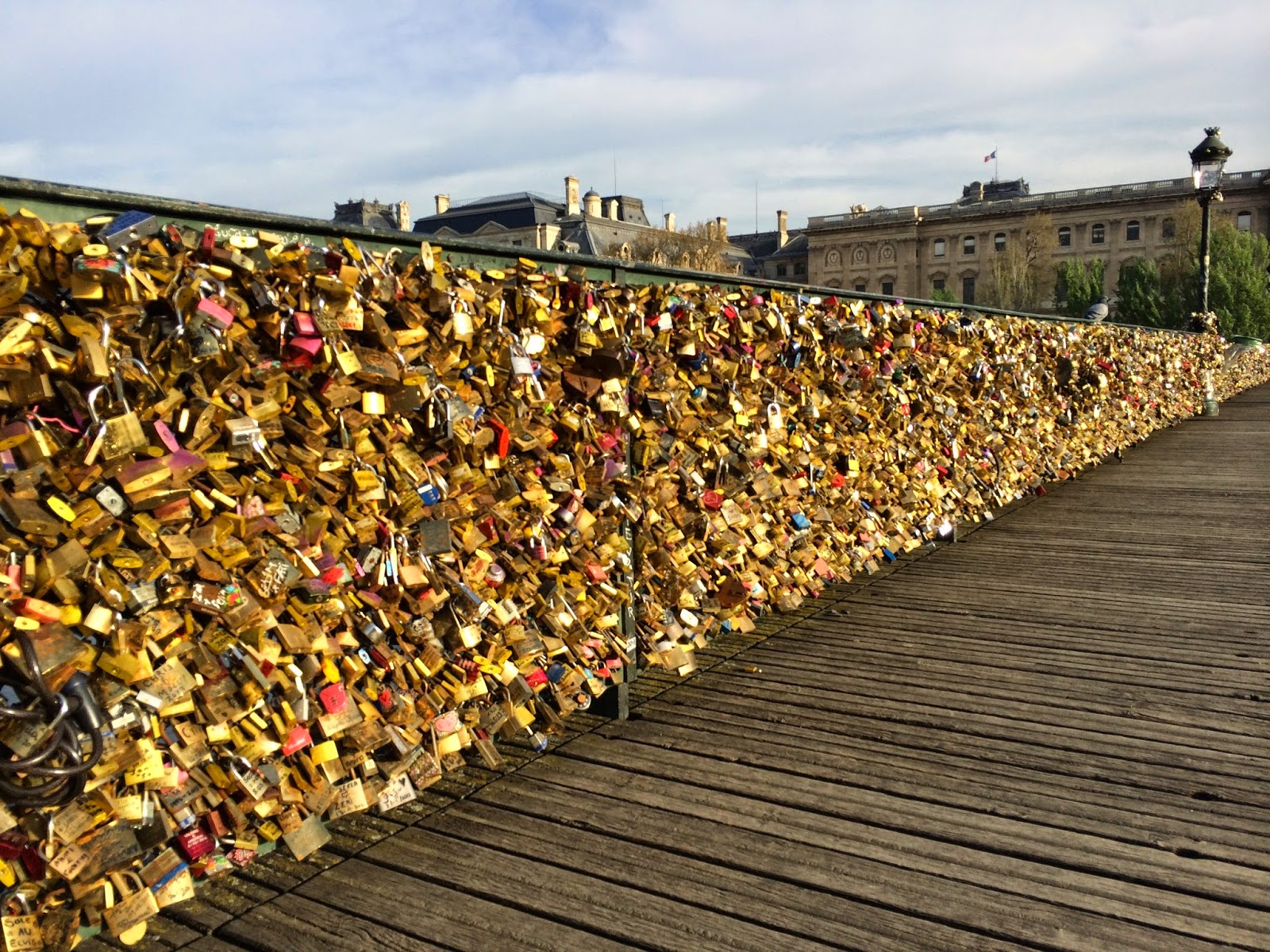 And from the bridge I ran over to the Louvre which wasn't open yet. So there were no tourists. The courtyards were peacefully empty. 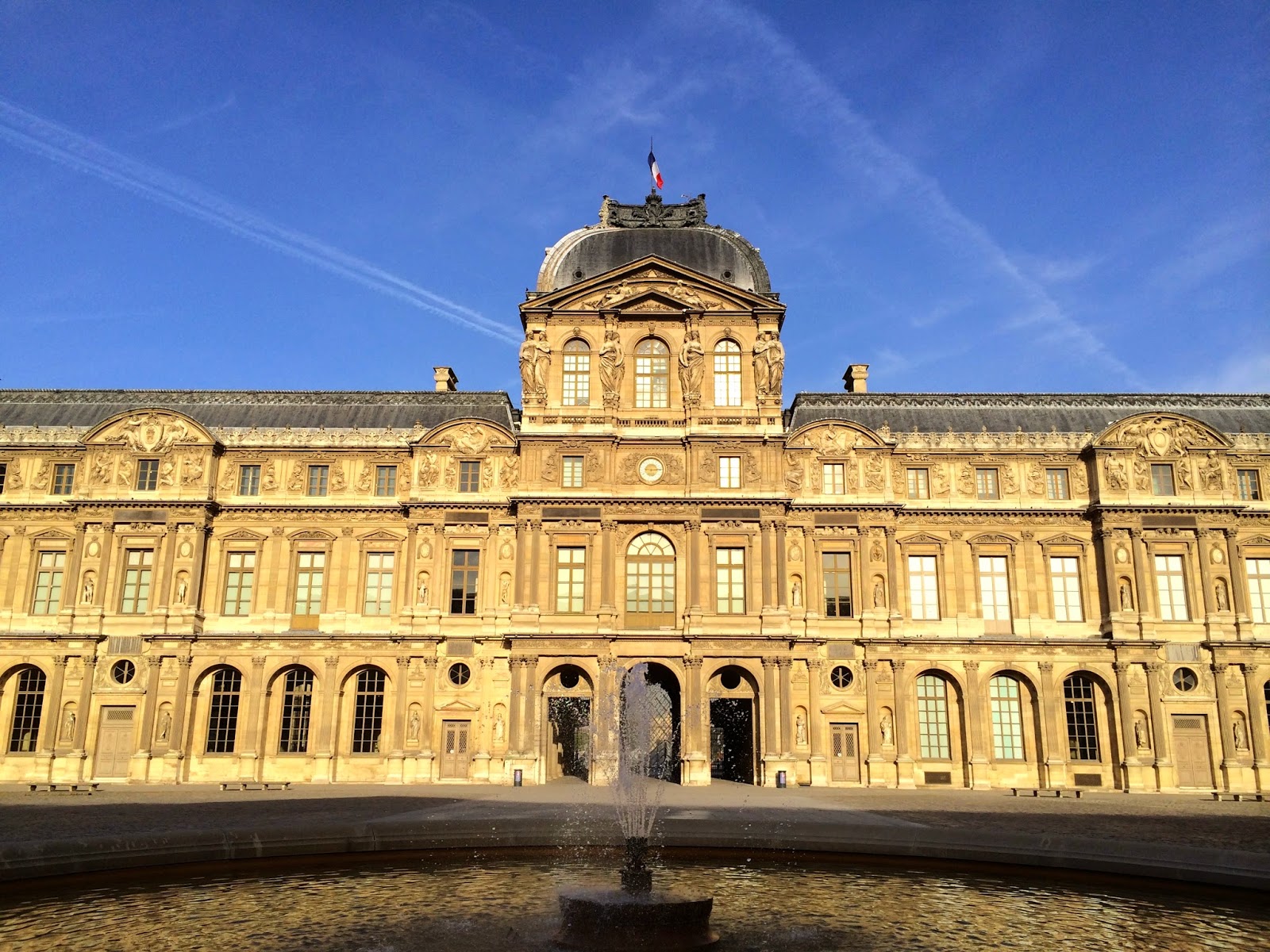 Two hours from now the pyramid will be surrounded by thousands of people holding their fingers just right so they look like they're pressing the pyramid down. But for now, it's really quiet. 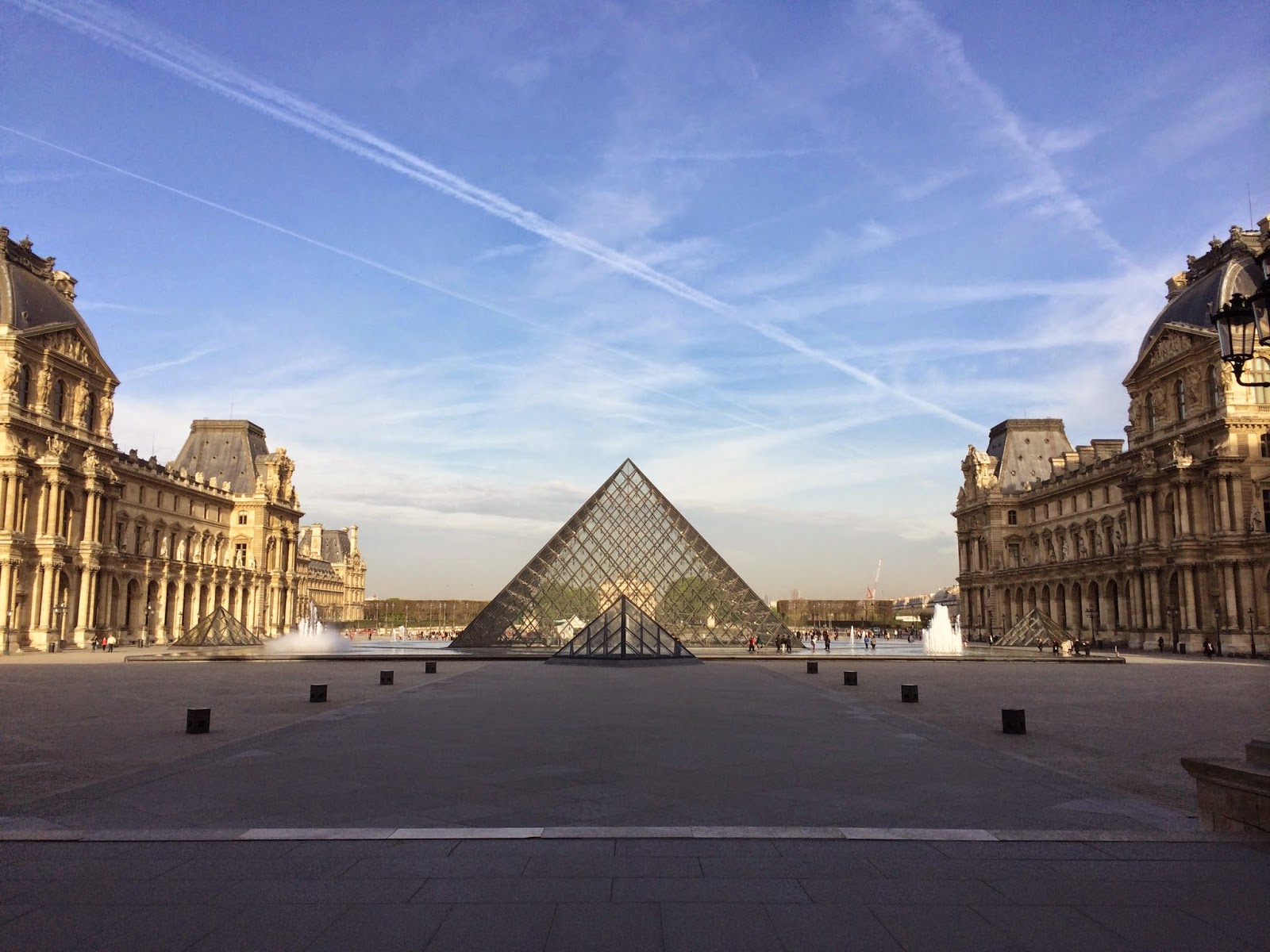 Our apartment was just two blocks from the Louvre, so we walked through this courtyard and the gardens beyond them dozens of times over the next month.

I went back to get a few of my traveling companions and we went exploring. This is the Palais Garnier, also know as the home of the Phantom of the Opera. 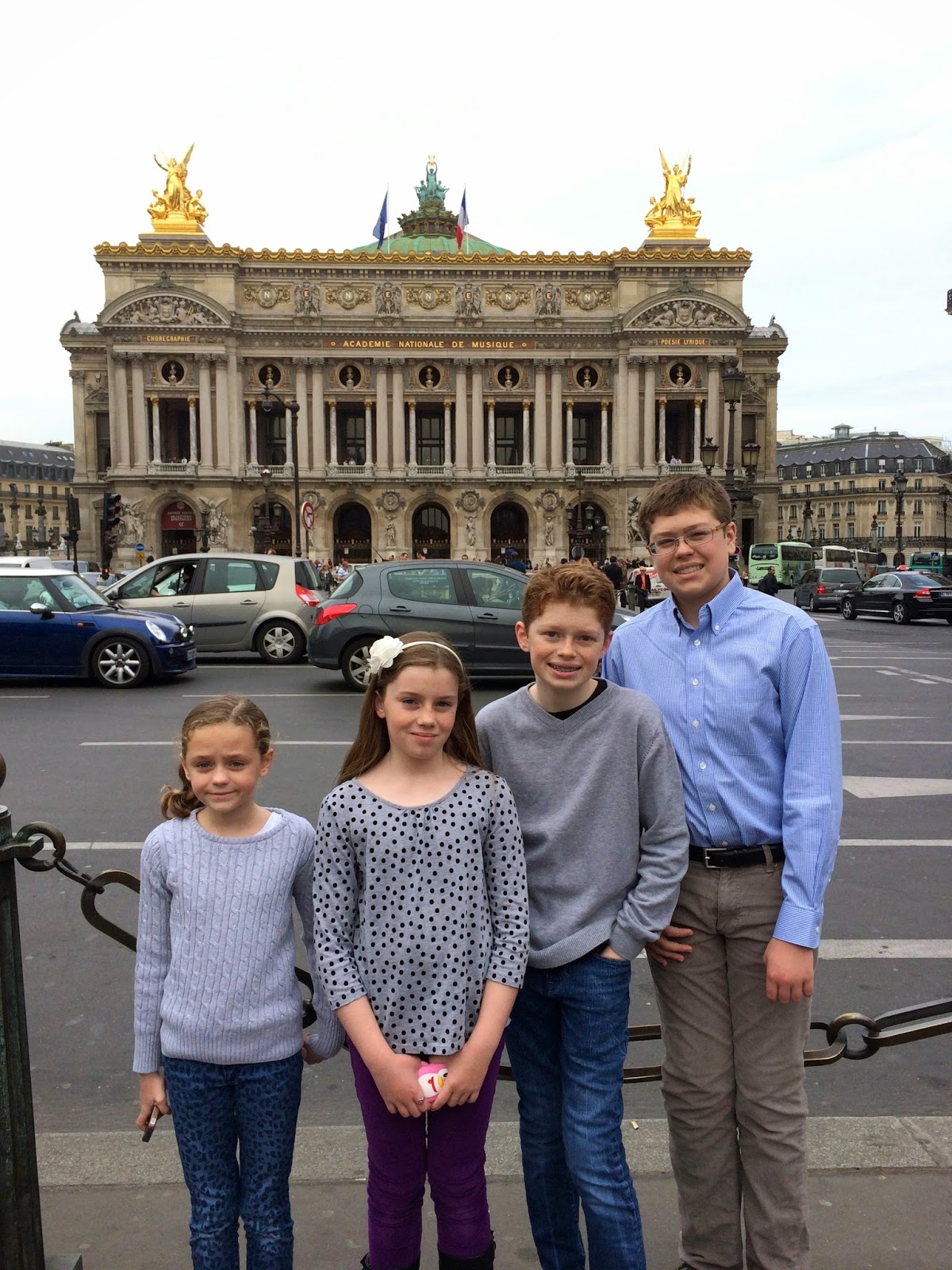 We wandered down the Seine to Notre Dame. It's hard to see from the photo, but there's a pretty good line of people waiting to get in. We were excited to join them. 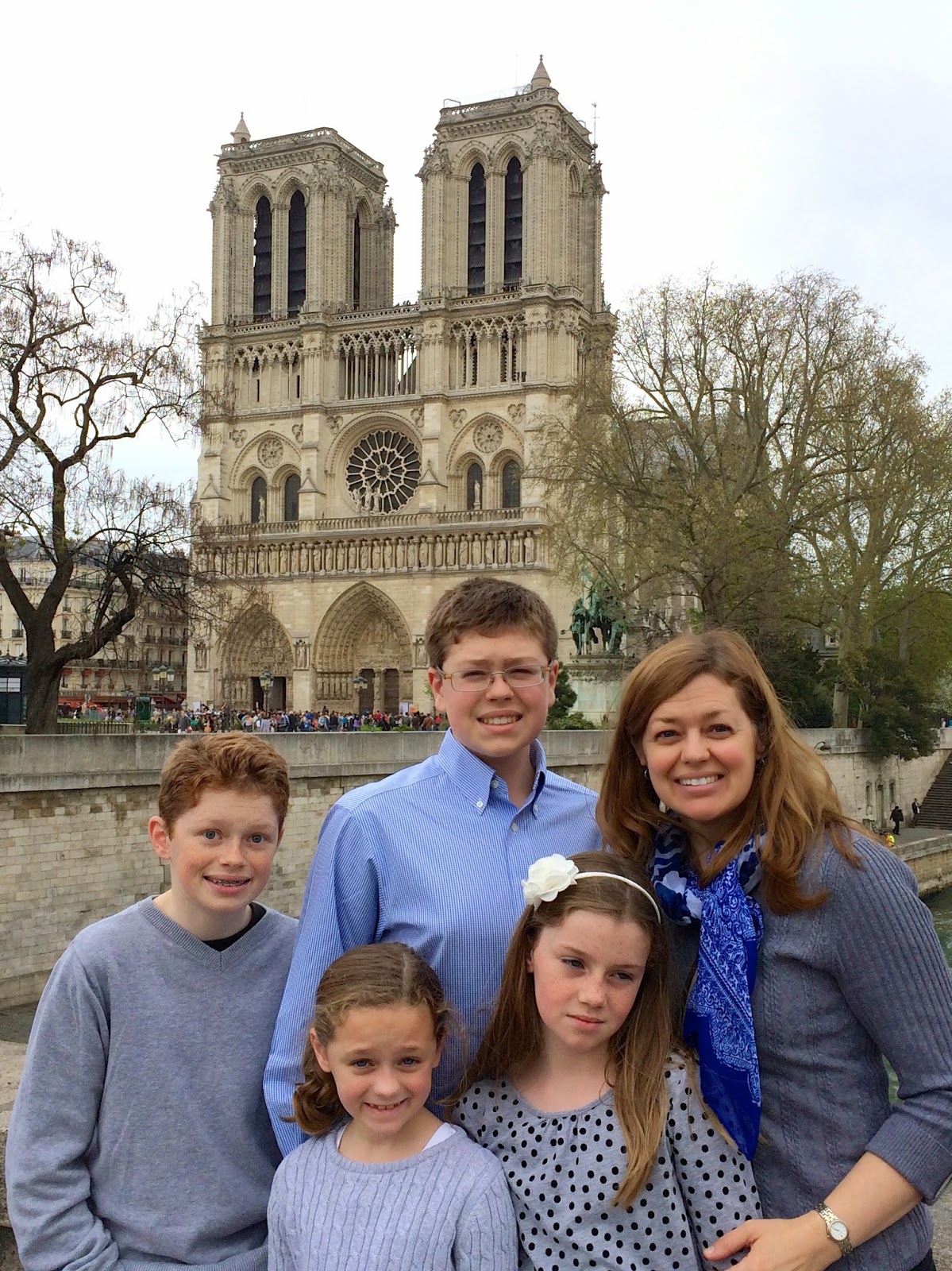 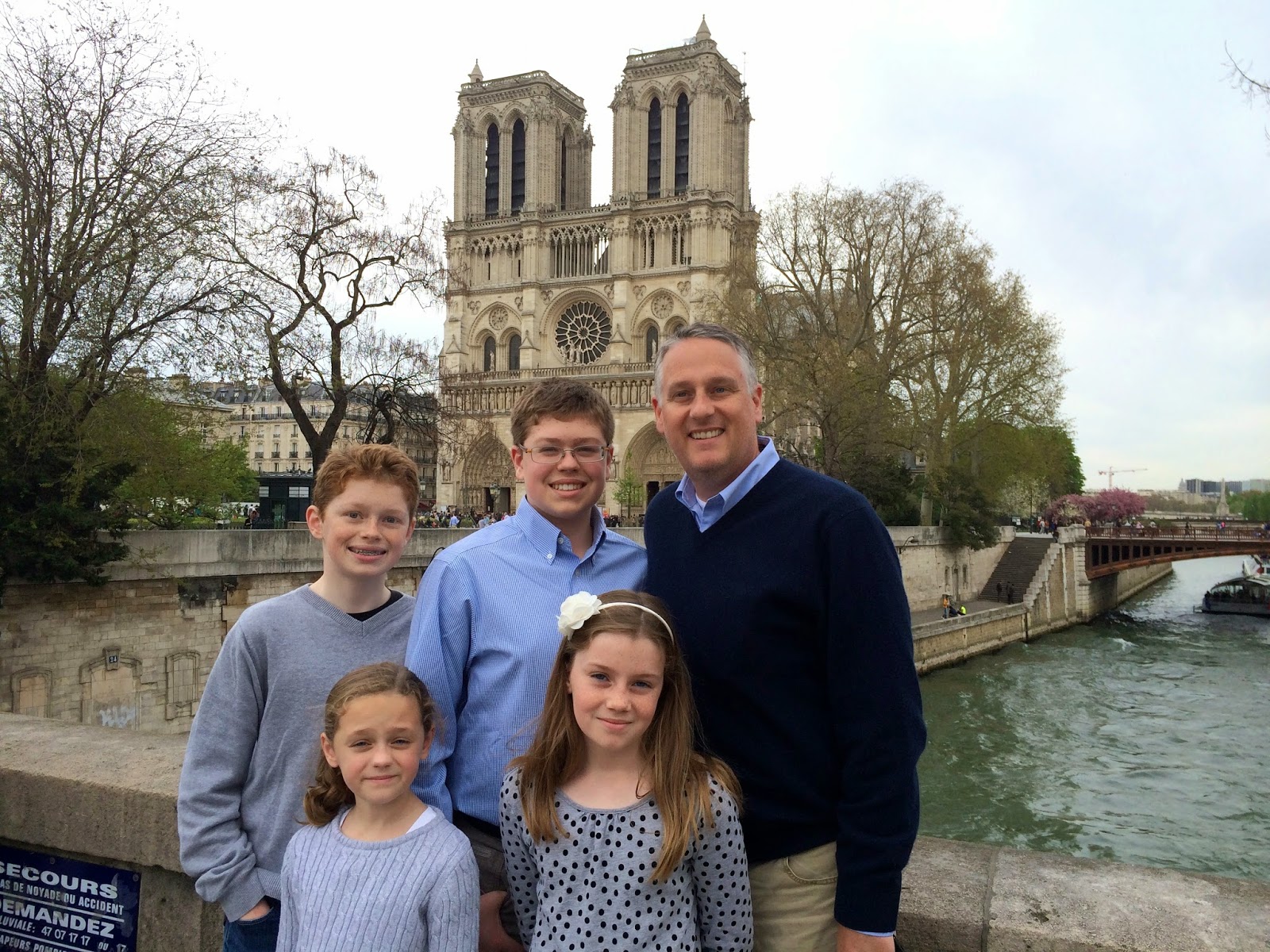 A historical aside... Notre Dame wasn't always a popular destination. During the French Revolution it was occupied by revolutionaries and rededicated to the Cult of Reason. The statues of the Kings of Israel, who stand on the Western Facade, were beheaded because the revolutionaries confused them with the Kings of France. They replaced the Virgin Mary with Lady Liberty. Fun crowd, those revolutionaries.

Napoleon was coronated here in a staged ceremony where he ripped the crown from the hands of the Pope and placed it on his own head, symbolizing that the people (or at least the emperor) had taken the power away from the church.

Then the cathedral fell into disrepair and was used as a warehouse. 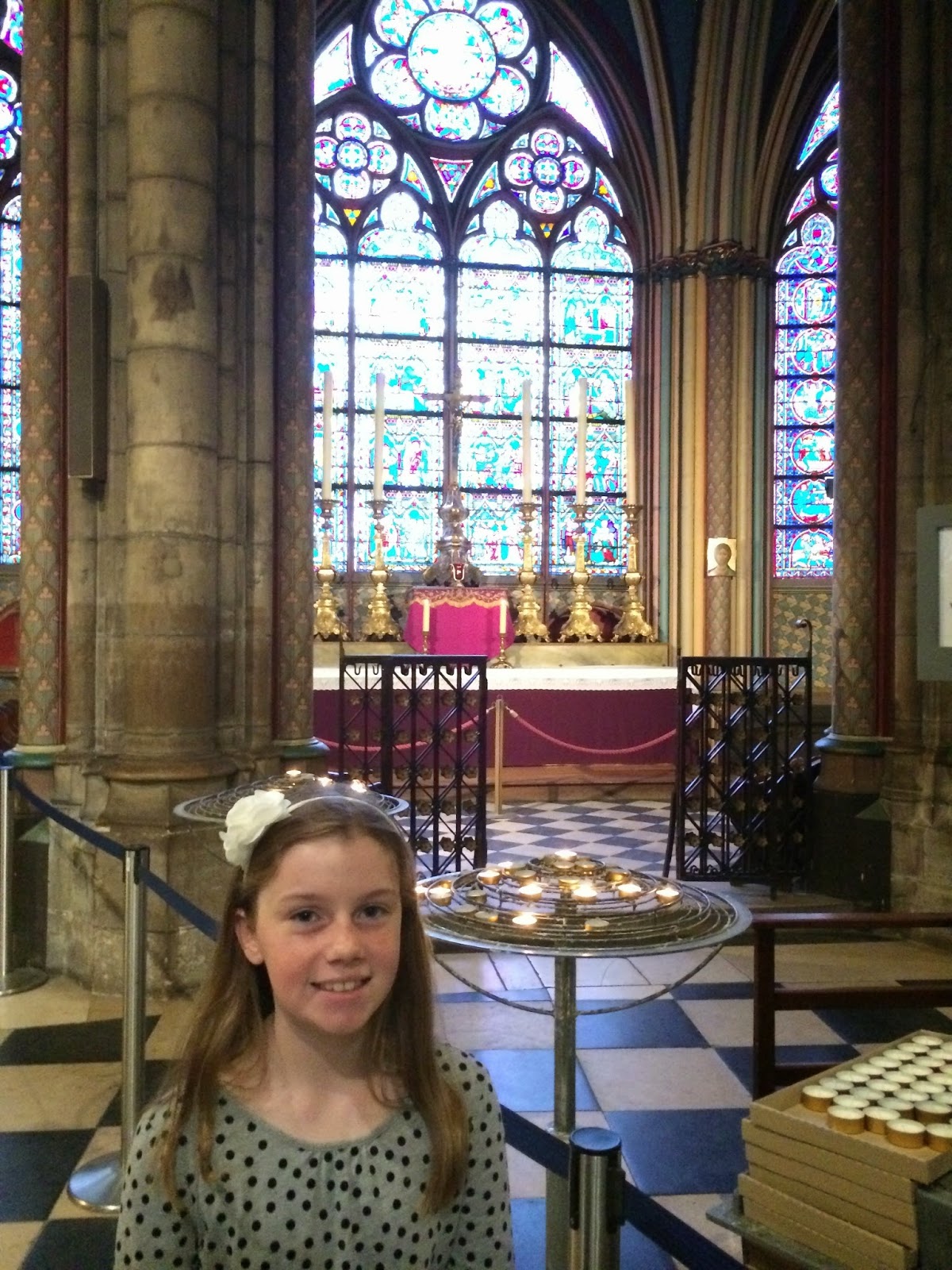 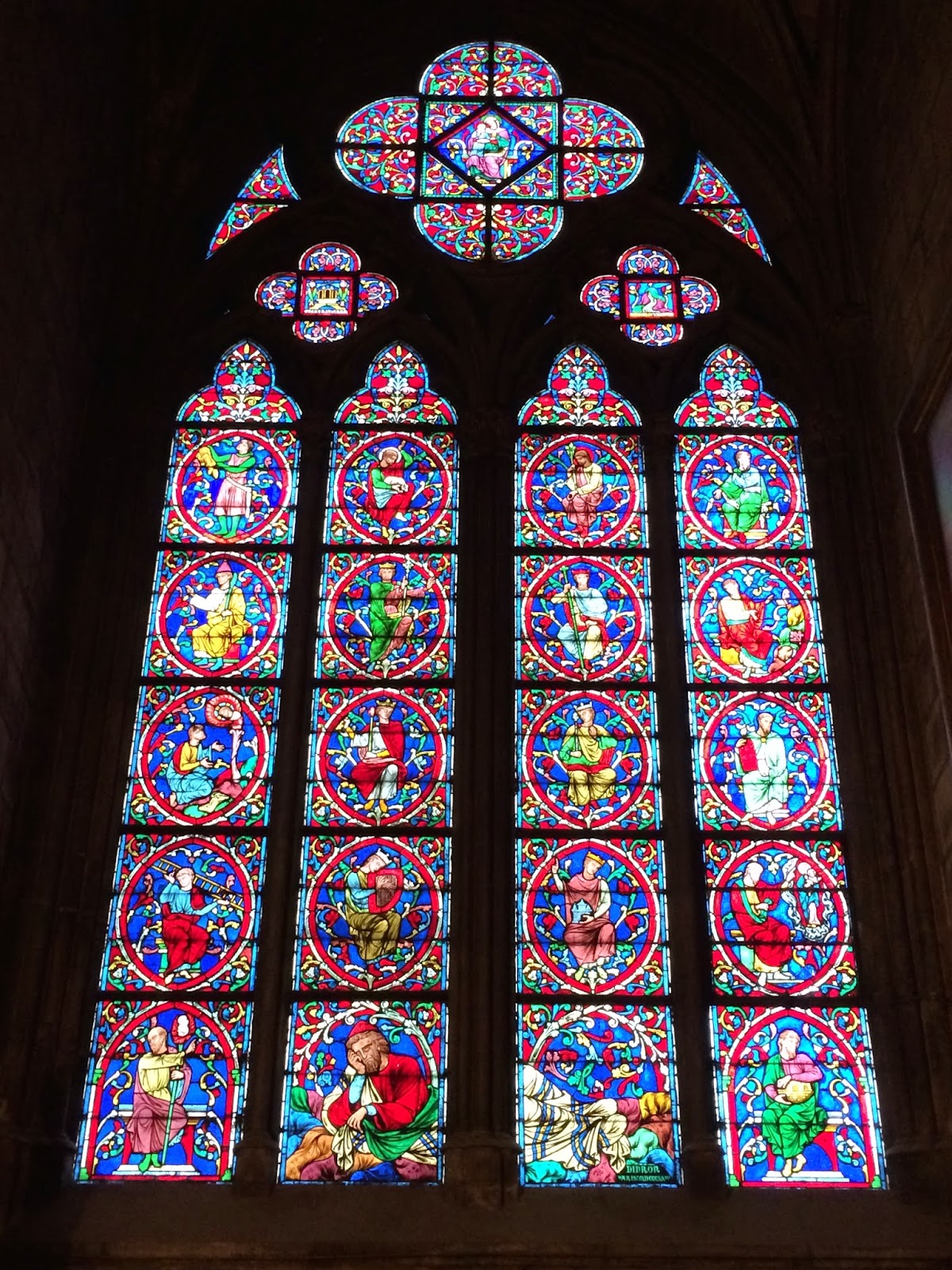 The Gothic architecture is impressive. But in the early 1800s, it had fallen out of fashion. Many of Paris' gothic buildings were being torn down and the stones used for more modern buildings. Victor Hugo thought the Gothic buildings were worth saving, so he wrote The Hunchback of Notre Dame to draw attention to this architectural treasure. It worked and the cathedral is the most popular building in Paris today. 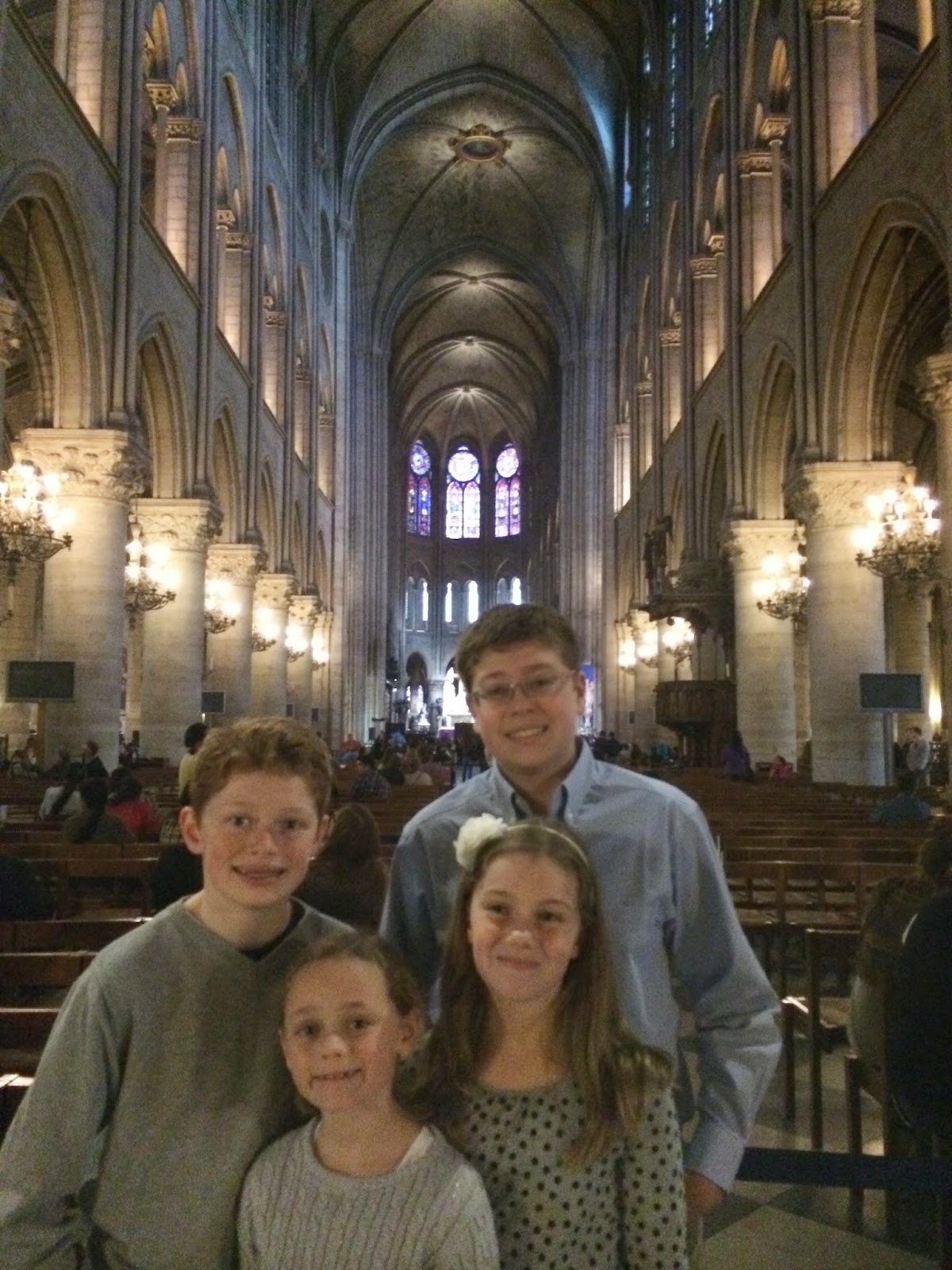 From an alter piece, Doubting Thomas gets a reason to doubt no more. Love the other apostles watching the scene from the windows of surrounding building, which seems to be a pretty good example of artistic license. 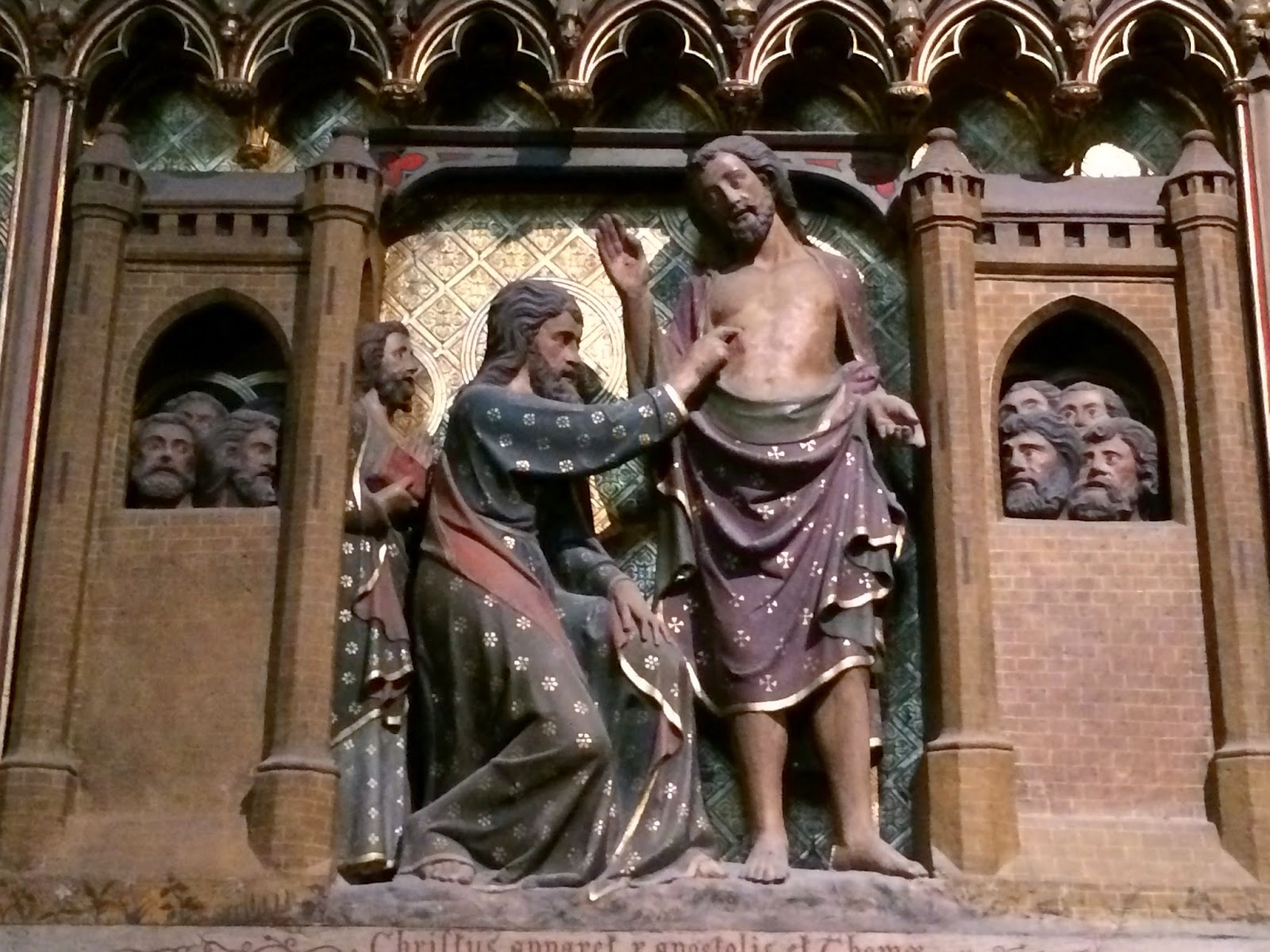 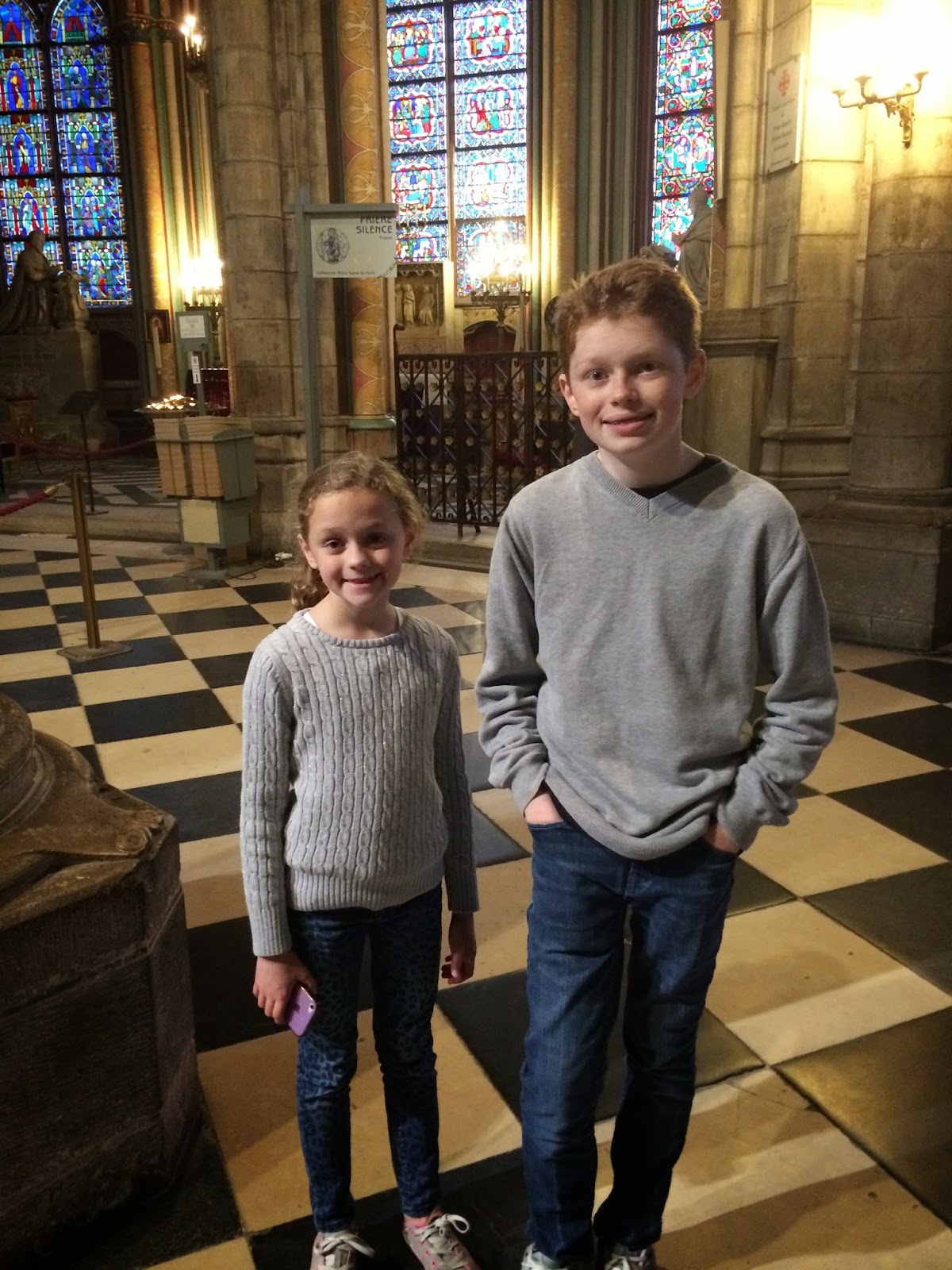 On the western facade. John the Baptist, apparently resurrected but still without his head. 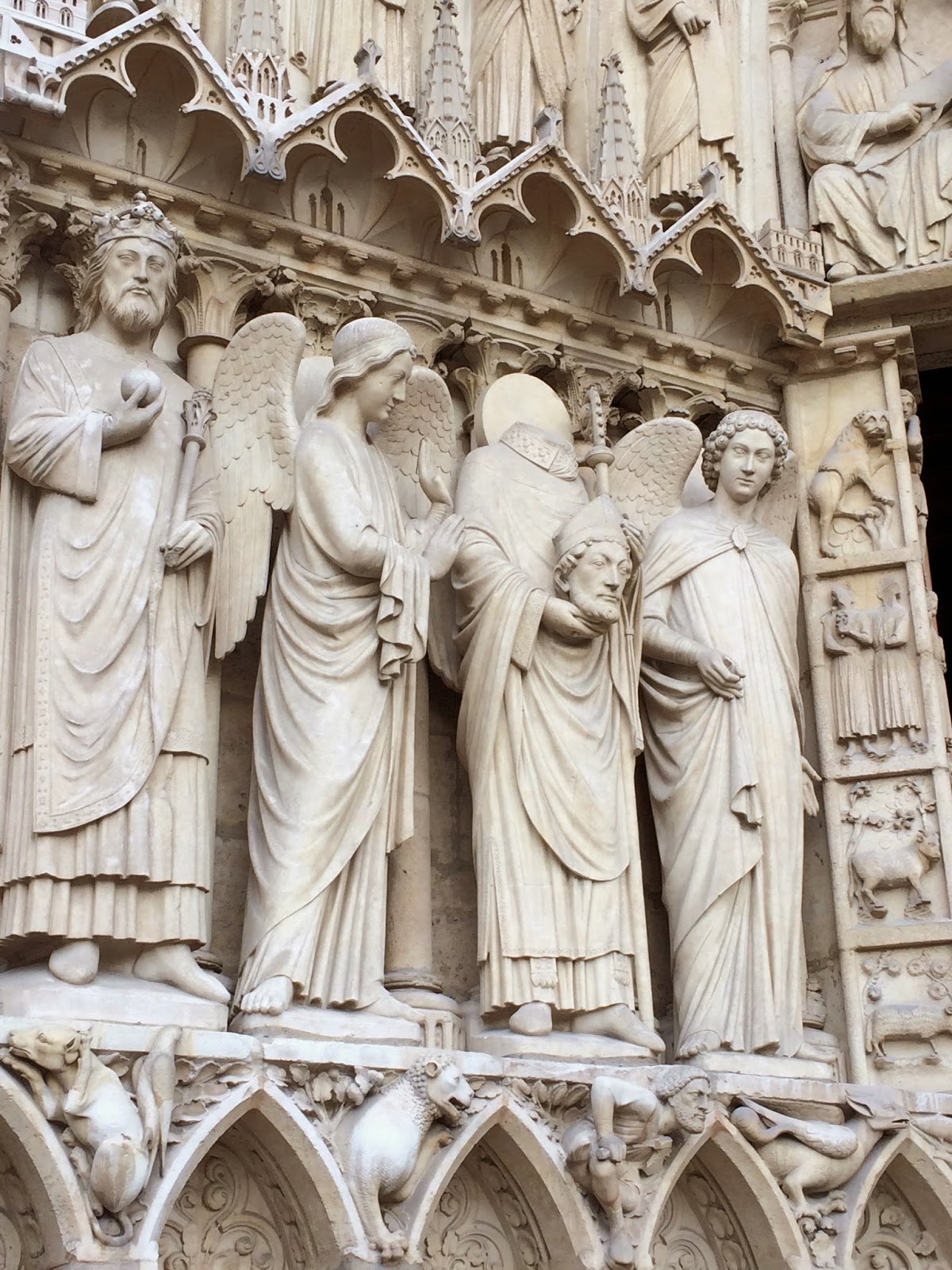 In the court yard in front of the cathedral is this statue of Charlemagne. Around Paris, the Metropolitan (metro) signs come in several different styles. I took to collecting a few of them. 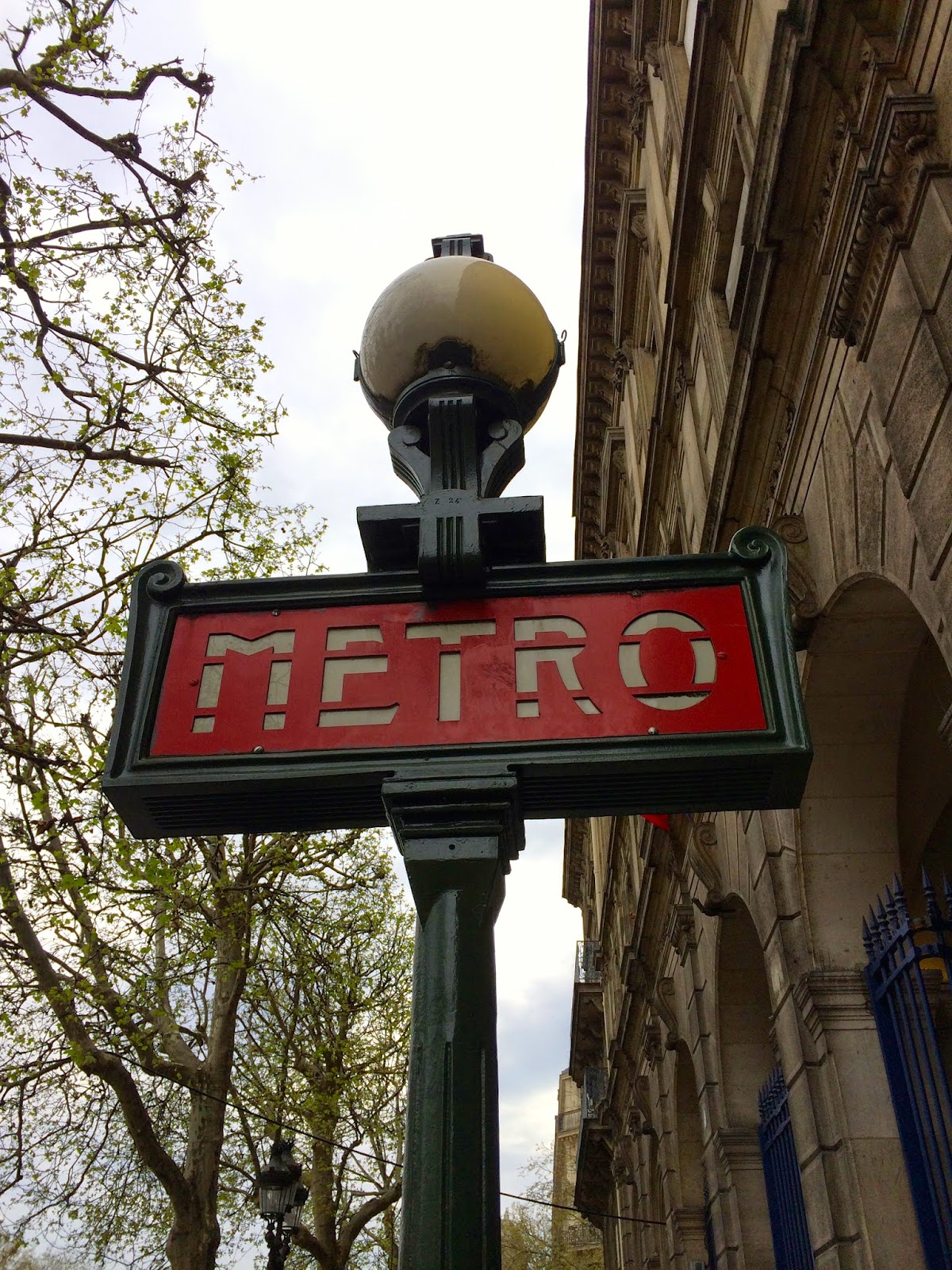 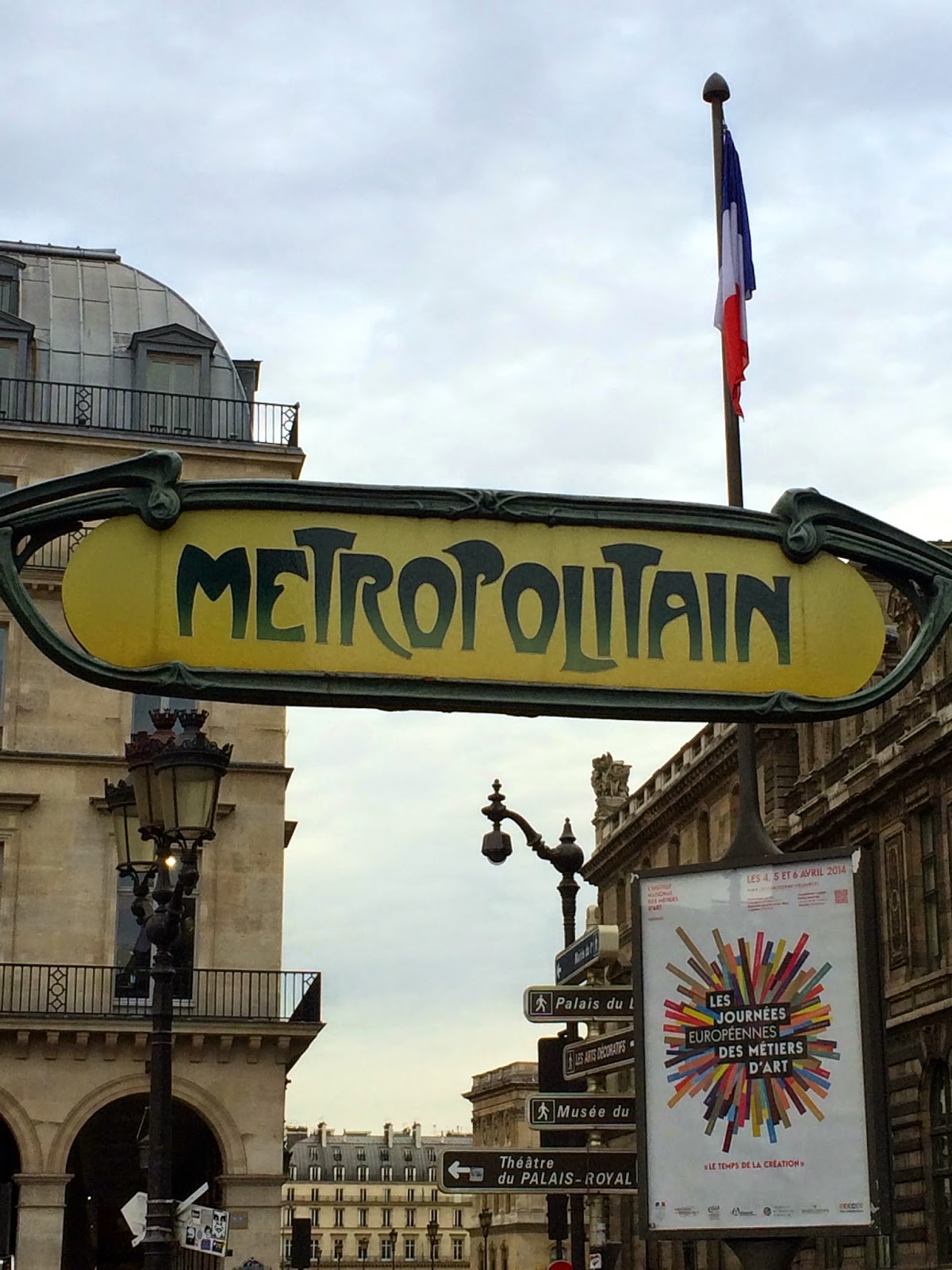 On our way back, we passed the Hotel de Ville (Paris City Hall) where Robespierre was arrested. It later burned and was rebuilt. 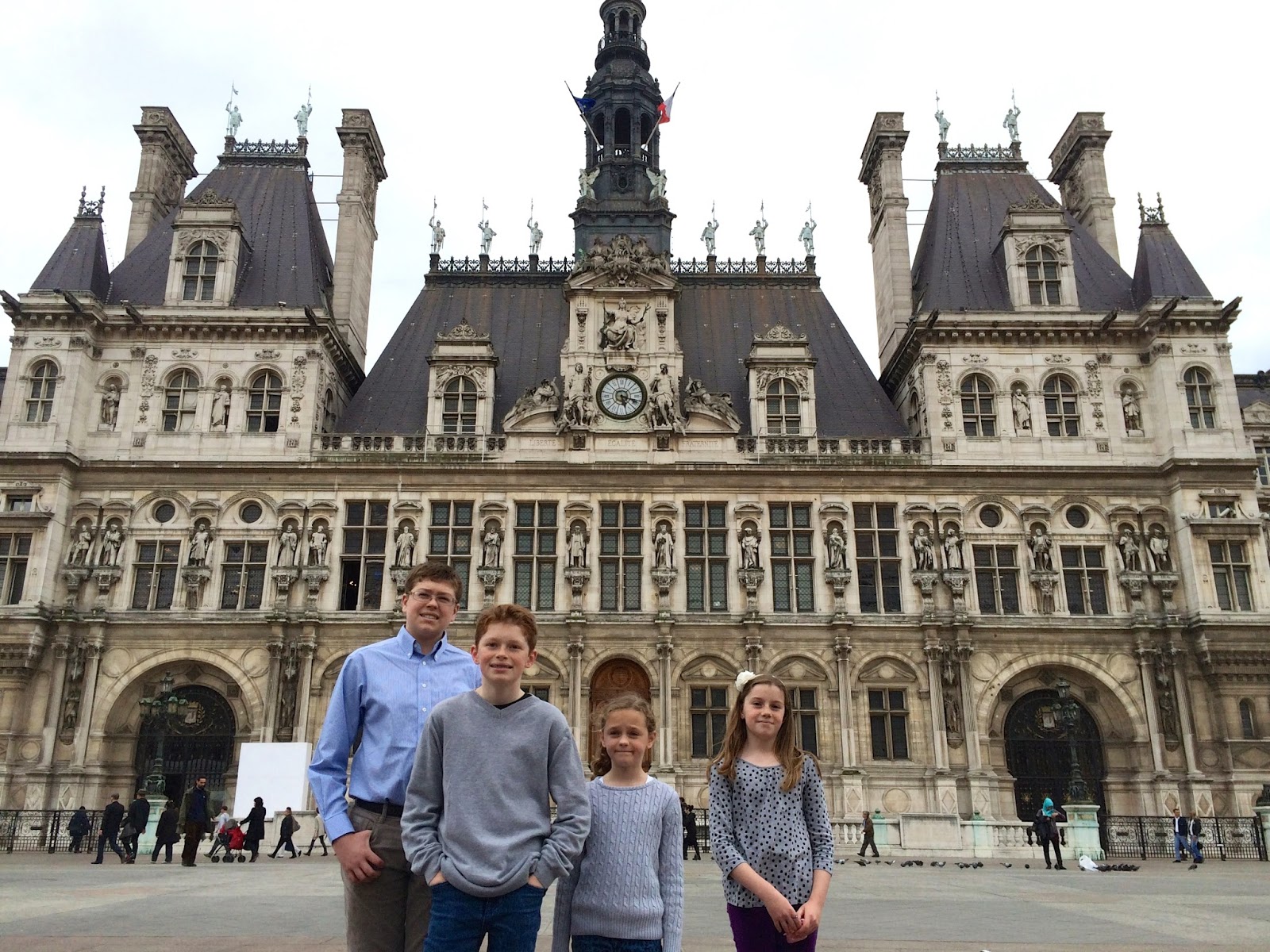 Our apartment was in an awesome location. As I mentioned, just a couple of block from the Louvre and just down the street from the Opera, smack dab in the middle of Paris's Japan town. This is the sushi bar on the floor below us. The French do a lot of foods right, but the sushi in the states is far superior. They kick our butts at bread and pastries, but they can't touch our 007 and Playboy rolls. 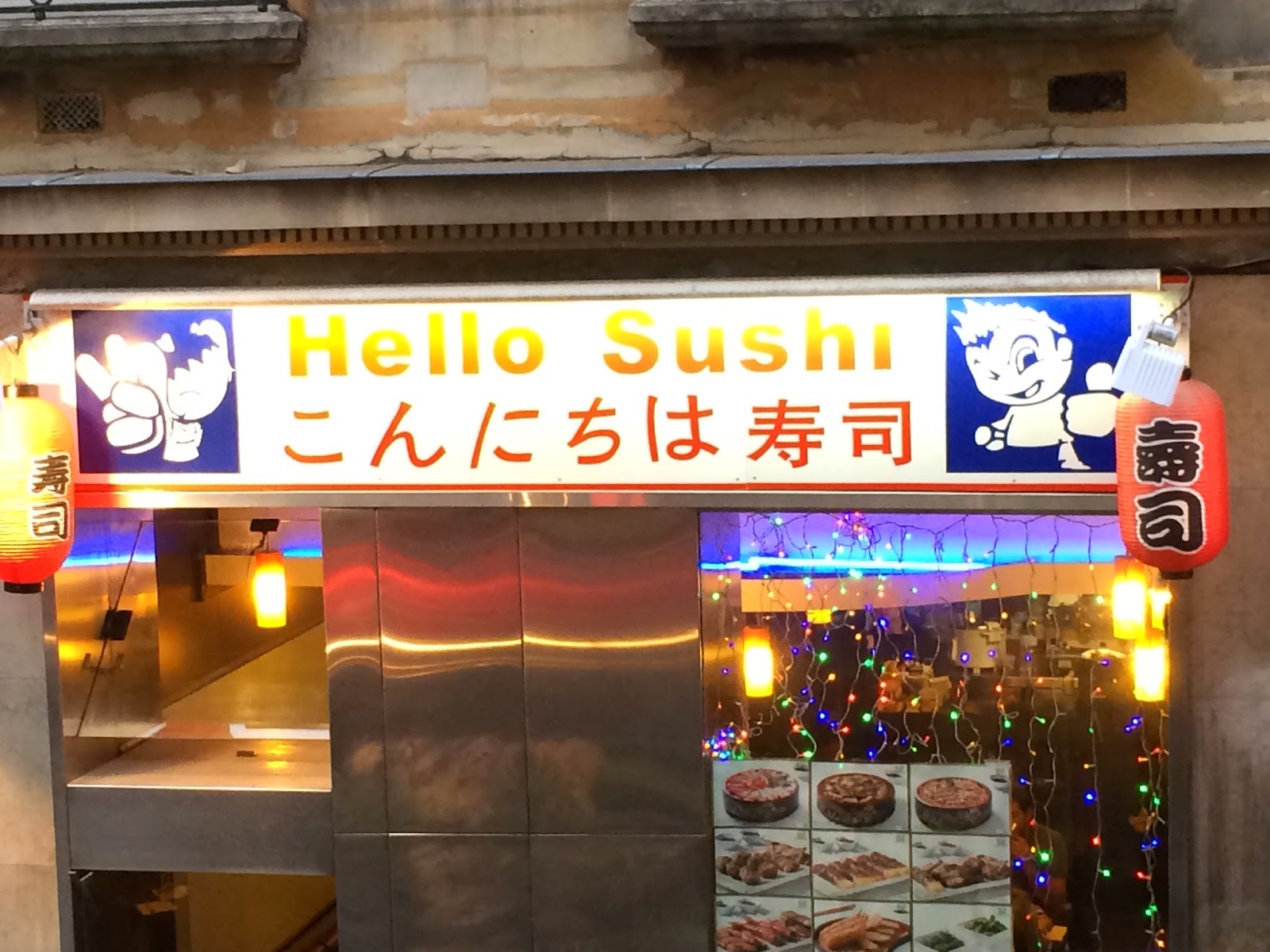 Last, the view from one of our windows, looking down Rue St. Anne. 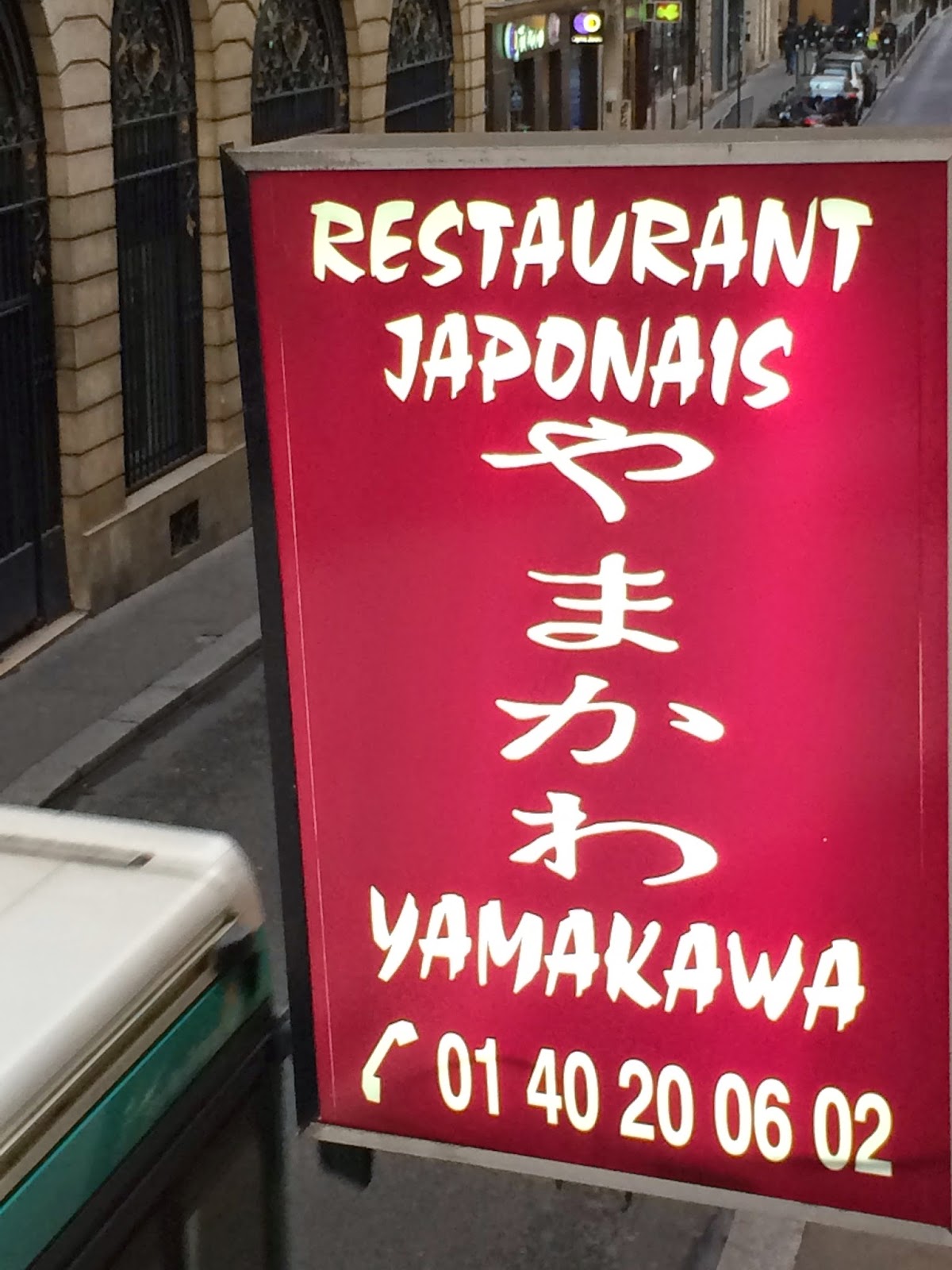 Posted by Michelle at 9:00 PM No comments:

“I guess it goes to show that you just never know where life will take you. You search for answers. You wonder what it all means. You stumble, and you soar. And, if you’re lucky, you make it to Paris for a while.”
― Amy Thomas, Paris, My Sweet: A Year in the City of Light

Paris! I spent my 19th summer there (well, a short train ride away, in Argenteuil) and loved it. On the other hand, Rob's short stopover while backpacking through Europe during college was negative. Something about being woken up by gendarmes for sleeping in front of the Gar du Nord. But even he was excited when we drove into the city and caught our first glimpse of the iconic tower. 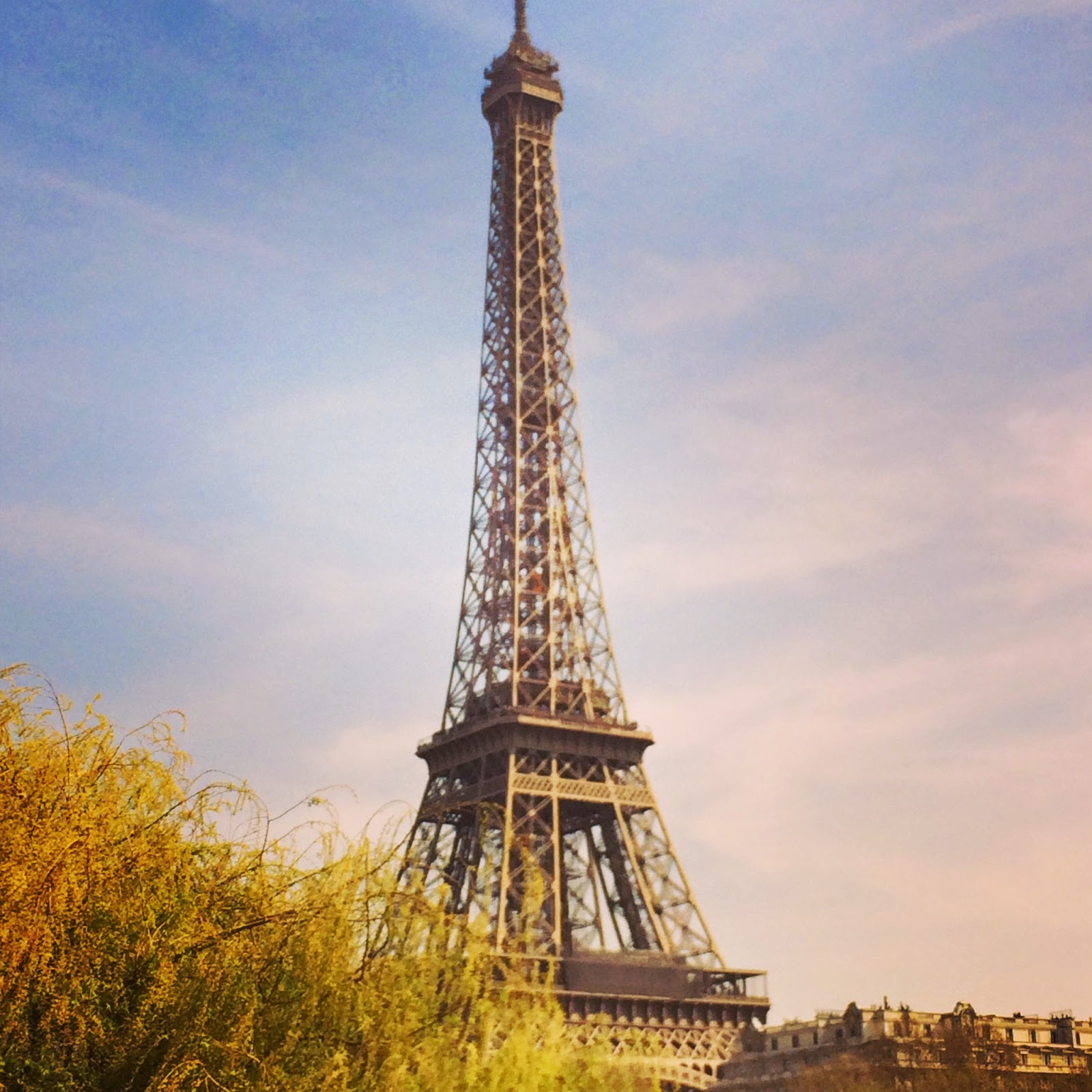 It was a splurge to rent an apartment in Paris, even one that had the girls sleeping on the hide-a-bed couch all month. But so worth it! I'm happy to report that even skeptical Rob wants to go back and live there again. Although he doesn't care to drive there ever again. :)

Luckily he only had to find our apartment (check out our awesome location, a short walk from the Opera and the Louvre):

After we dropped off our luggage and checked in with super-nice Frederic, from the rental agency, we drove the car to Eurodrive to turn it in, and spent the next two months car-free, relying on the excellent Metro, Underground, buses and a lot of shoe leather.

I picked up a few provisions from the nearby grocery store, Monoprix (think Super Target, only with fabulous French food) and we unpacked. The three younger kids were happy to have dinner from the local boulangerie, but Rob, Robbie and I went to one of the many Japanese restaurants on our street and loved the Udon Noodles. I should add a post dedicated to the culinary delights of Paris, this was the first of many! 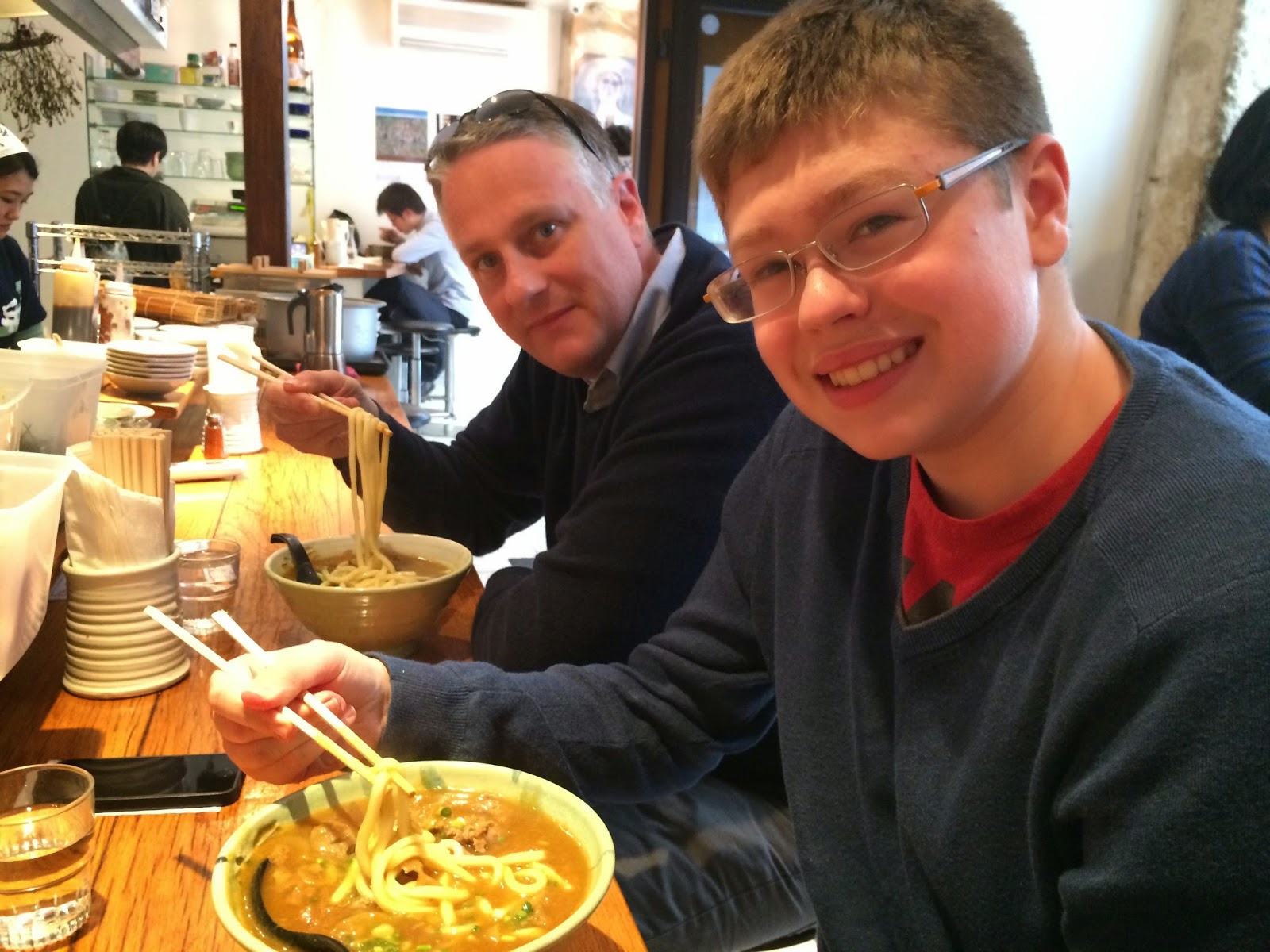