Our Trip: The OCD Version 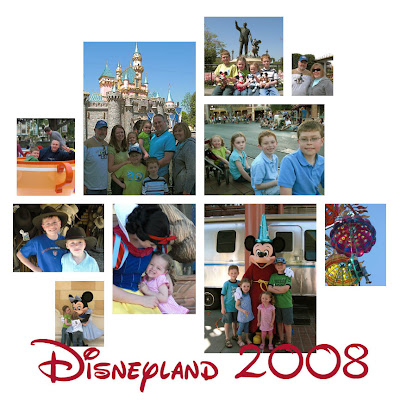 9 days, 1613 miles, 4 kids, 1 suburban, 3 theme parks, 8 loads of laundry, 336 photos. I know, it sounds like the makings for a modern version of The Inferno. But it wasn't. We had a great trip. The fact that we were able to break up the long drive with an overnight stay in St. George really helped (thanks Ralph & Judy!), and it's hard to imagine a Disney trip without having a 1:1 kid/adult ratio (thanks Mom & Dad!!). The kids all travelled well, giving us hope for a church history road trip someday. We had to stop at Borders on our way home, because I underestimated the number of books the boys would go through. The parks were relatively uncrowded, even though last week was spring break in Utah County (we did see a lot of BYU apparel). It was between about 65 and 90 degrees our whole trip, and when we heard that it was snowing back home, we were on the verge of looking at real estate.
Some of the highlights were:
Oh, and if you're wondering what I forgot...it was clearly a subconscious plot on my part—I forgot the laundry hamper, detergent and dryer sheets. I did laundry on Thursday, our "off" day, so we could just pack five changes of clothes instead of ten. I picked up a couple of fold-up hampers in St. George and detergent in San Diego, so it was no big deal. The hotel had four washing machines and six dryers, so I was able to do all the laundry in just a couple of hours, watching the kids swim in the pool while the loads ran. If we are ever really wealthy, my laundry room will have at least two washers and dryers!
In spite of my obsessive-compulsiveness, two figures were deliberately excluded from the tallies: one is the number of calories consumed on this trip, and the other is the total dollars spent. I think it's safe to say the calories number would be higher, but the dollars spent could be scary too. On the bright side, we saved $299 by going before October 17th, when we'll have to pay for Ainsley's ticket and the adult price for Robbie's. And although the Master Card campaign is so cliche, this vacation really was priceless. 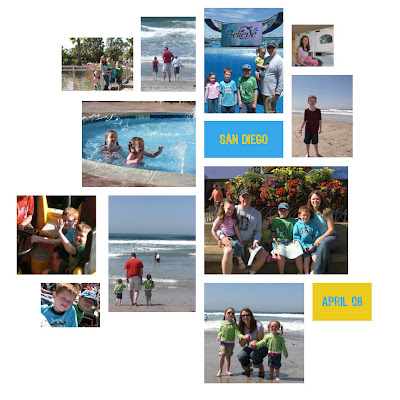 Is this more cool stuff you can do with your fancy software? I'm jealous.

Welcome home! I'm very jealous -- you guys look and it sounds like you had a wonderful time.

Melis--It didn't take any fancy software to take a trip to California. Just a little bit of patience and a Chevron card. ; )