Not quite a super fan 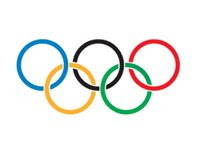 After watching the amazing opening ceremonies, I told Rob that if I had the time and money to be a super fan of something, the Olympics could be it for me. There are a lot of pros: world travel, great ideals, lots of variety, and awesome achievements. Being the cynic, he pointed out the corruption and greed of the IOC, the doping and scandals, the commercialism. But he was cheering just as loud as Robbie and I were when the US men's swimming team "smashed" the French team and the world record last night. I may not be a super fan, but I'll be tuning in for the next thirteen days.

Yea for our Baltimore boy, Michael Phelps! The swimming has been so much fun to watch.

I am LOVING the olympics this year - be sure to catch Jake Gibb (beach volleyball) - we grew up in the same neigborhood!