The Stringham, I mean, Marsh Adventure

I mentioned to Rob that I was thinking about updating the blog today, making it clear that I was only thinking about it, not promising to actually do it. He told me to make it easy on myself and just link to Melissa's blog. We did cram four days of fun activities with the kids in the week before school started, but she's done a much better job at posting than I have. So you can see what we did Monday, Tuesday, Wednesday and Thursday by just clicking. I actually feel a little guilty that we spend more time with these cousins than other cousins or friends, but it is SO convenient—they live so close, and everyone has a buddy their age (except for Peter, and so far at least, he doesn't seem to mind). Plus they are awesome and way fun. Of course this fun all took place over a week ago so I still have plenty to catch up, including the first day of school and Ellie's birthday. I'll get to the school stuff later...here's what we did to make Ellie's day special:
Since Rob wanted to get a long bike ride in around ten, we opted for a birthday breakfast and let Ellie choose the where and what. Of course we ended up at Hagermann's for french toast. 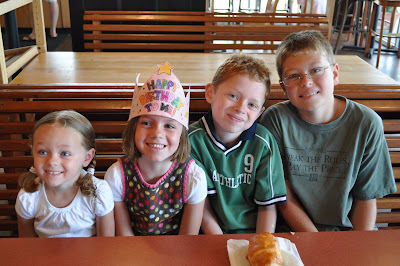 Definitely a good idea to open presents first thing—I think we could have gotten away without planning anything else for the day, since she would have been content to play with her new things. 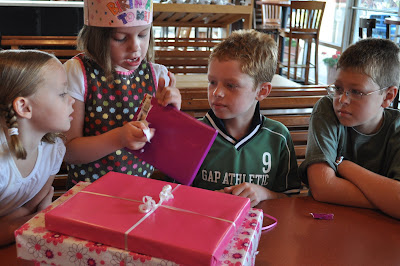 She got an MP3 player, some new shoes, a magnetic paper doll, Annie on DVD, a book and new ballet clothes. 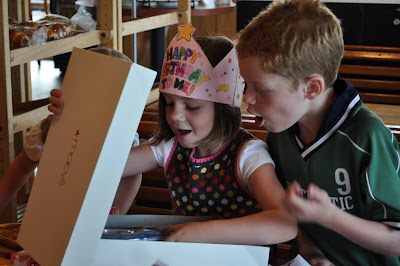 Great-grandma Clayton joined us, and Grandpa Riley (behind the counter) was able to take a break while it was slow and eat with us. 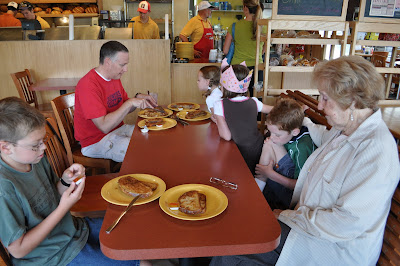 I really tried to get ONE shot without a silly face, but silly and six just seem to go together. 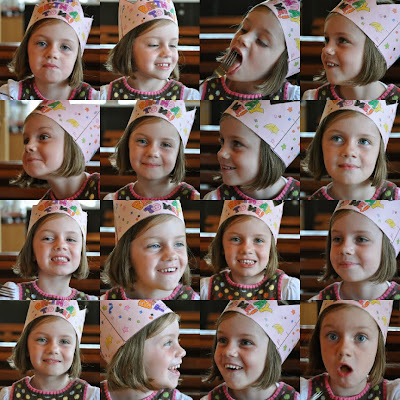 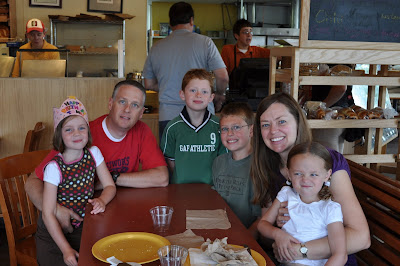 While Rob was off logging around 70 miles with Shawn, I whipped up some cupcakes (which were unfortunately not photo-worthy) then we headed to the Murray City pool to hook up with the Stringhams. Ellie was very excited about the water slide, so it was a bit disappointing to find it out-of-order after we had paid and were already in the pool. 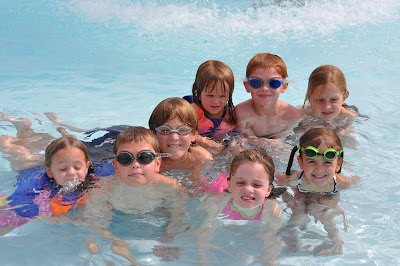 But, with some chocolaty sweetness, 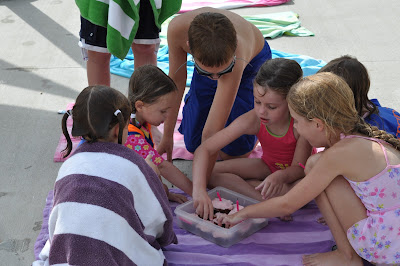 diving board poses for the older kids,

and fountain fun, they all had a good time anyway. 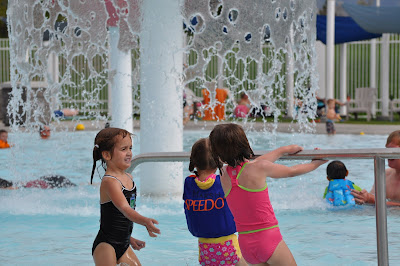 Thank you Stringhams for making Ellie feel like she got a party when she really didn't. :)
Melissa, I'll have to e-mail the rest of the photos to you—there are some cute ones of just you guys and Peter. Then when you blog it I can link to you again. :)
Coming later today (or maybe tomorrow), an interview with the birthday girl. We love you Ellie!
Posted by Michelle at 2:11 PM

Happy Birthday Ellie!
Michelle, I just keep crossing my fingers every time my boys talk about marrying your girls. I'm thinking about getting it in writing....maybe draw up a legal and binding betrothal......

Michelle, don't worry about playing so much with the Stringham cousins. It was the same for us Nichol and Riley cousins. Remember? Sounds like a lovely birthday for Ellie.