This was going to be a straight-forward post about our first swim meet of the season, but I started getting all nostalgic.
This is our fifth summer on the swim team. Here's a peek at the kids our first year: 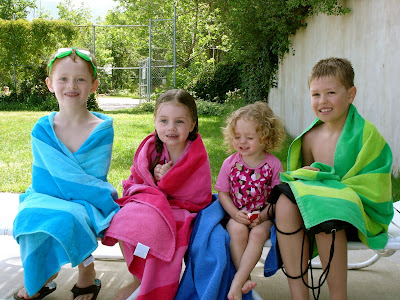 Robbie was eight; Joey, six; Ellie, three; and Ainsley, one. Robbie was on the "Swim-to-Win" team, and didn't compete in any meets. Joey was in lessons, but NOT happy about it. It was really a spectacle when he had to go off the diving board. Ellie and Ainsley would play in the baby pool, and I couldn't take my eyes off them for even a second. It was exhausting to get everyone ready to go, with suits, towels, goggles, snacks and sunscreen. When we got home I had to bathe and dress them again. I wondered if I'd made a mistake.
This year Robbie is almost thirteen, so it's the last year he'll come to the later practice (8:30 a.m. instead of 6:30 a.m.). Ainsley (five) is on the team for the first time, and thrilled. The kids all swim for an hour a day, and will swim in nine meets in June and July. They are not the fastest kids on the team, but they are solid swimmers (well, the older three, anyway) and they love it. Robbie and Joey get dropped off at the Stringhams at 8:00 a.m. and bike to the club, then back after practice. I show up with Ellie and Ainsley for practice at 10:00, and usually make it home by noon, after their lessons and showers. I enjoy our mornings there—I don't have to worry about anyone drowning anymore, and get to hang out with Melissa, and see other friends I've made over the years. By the time we get home, I don't have enough time for everything else I want to do, especially on the days we have meets, but really, that is the only downside (well, it's not cheap either). I'm so glad we've stuck with it. Even if they are never competitive, the kids have worked hard, and gained a great life skill. They have bonded even more with their cousins, and we have great memories of our summers at the pool. And I don't have to listen to them ask if they can play video games all day long (only half the day :). Anyway, when I walked into the club for our first summer practice (they practiced after school for three weeks), I felt a surge of happiness. This is summer.
And finally, here are a few photos from our first meet. Here's Joey, probably twice as tall as he was, and a hundred times more comfortable in the water. In the background you can see Robbie (with Lindsay). 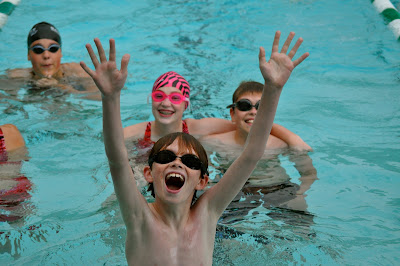 Ainsley was a spectator at this meet, taking advantage of a rare opportunity to wear a pair of "real" glasses. Her teeth are the only remnant of that cute toddler. 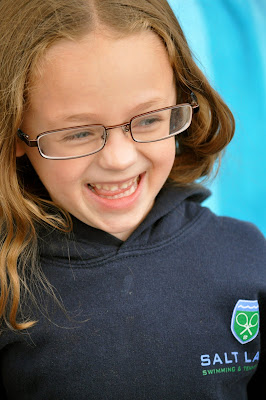 Ellie, waiting for her race to start. 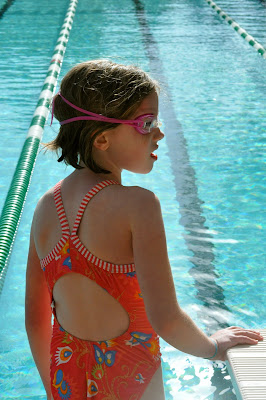 She's made a ton of progress, even since last year. She's very proud of the fact that she's in lane five (lane six is the top lane). 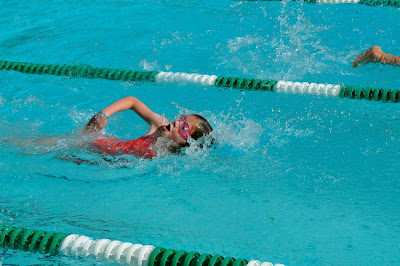 Here's Joey. Needs to get his head a little lower, but a nice stroke. 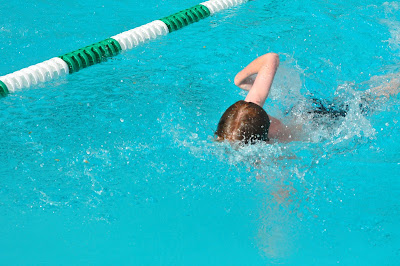 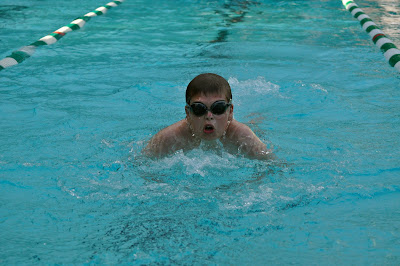 This next photo is NOT one of my kids. One of my friends told me she'd love a good photo of her son doing the butterfly, so I took a bunch, and initially thought I'd post this one as another reason I LOVE my camera. But now that I've gone the sentimental route, I can't help but think of the next five years. Another huge shift in our lives. I'll be busy trying to savor (and photograph) every fleeting moment. 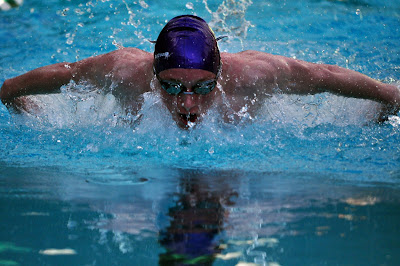 Great pics - love the butterfly! Your kids look awesome and it's great they love swim team as much as they do - we're in the same boat with the tennis commitment and tourneys . . . seems like our summer days are flying by, yet, they are busy and exhausted at the end of the day which is a good thing :-).

AWESOME pic, want to come get one of Aubrey, I've got a million...still trying for THAT one!! Great job!