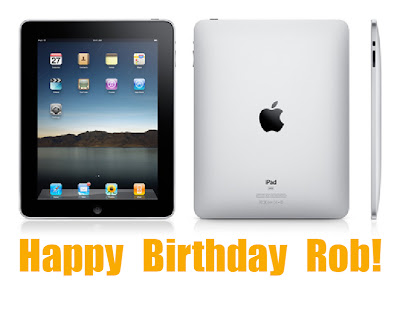 We started out with a pancake breakfast. 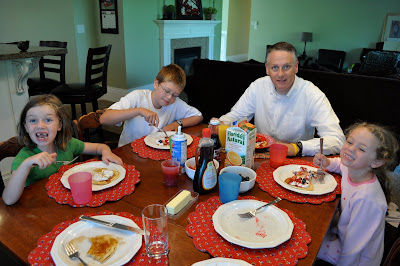 I know I've posted this link before, but in case you missed it, these are the best pancakes ever. 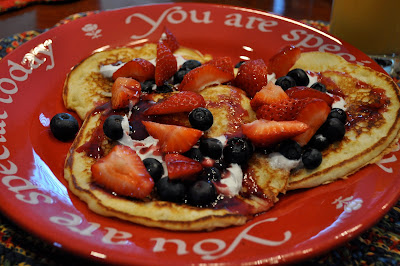 We ended the day with brownies, of course. But not just any brownies. Rob requested S'mores Brownies, which I'd never made before. I made a graham-cracker crust, poured the batter on top, and then threw marshmallows on top the last few minutes of baking. I turned on the broiler to brown them up, and about a minute later the smoke alarms started going off. Yes, they were all on fire, and I wish that I'd had time to snap a photo. Luckily they were the jumbo marshmallows, and even after I scrapped off the burnt top, we had more than enough. They were way too rich for me, but everyone else gave them a thumbs-up, in spite of the messy factor. I'm going to have to play around with this recipe so that it's easier to cut and not so rich. But not for a while. 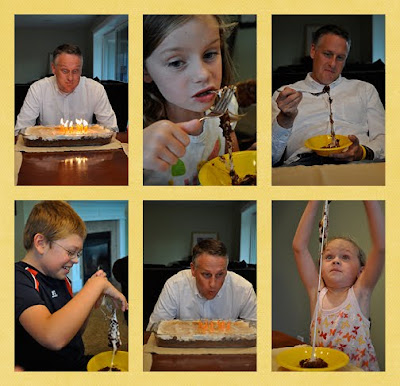 Anyway, all the hard work in the kitchen + a new iPad = definite proof that I love Rob the most.
Posted by Michelle at 8:00 PM

Oh, lucky Rob. Was he thrilled? I think you'll have to let us help you test out the next batch of brownies. You know, just so we can make sure they're OK.

He was happy. But he's generally pretty happy, so was it really worth it?

There's no need to wait for the next batch. We most of the pan left. Come over tonight or sometime tomorrow.