Too busy to blog

I'm backdating this entry—blogging was not in my top 100 thing to do the day before we left. Here are a few things that did make that list:
1. Instructions for our babysitters, Lupita and Jason Kyle. Six pages detailing the kids schedules, routines, jobs, food, contact info, etc. It was a validating yet overwhelming experience to write down what it takes to run this household. I decided we weren't paying them enough. Being the mom just isn't a job that pays off monetarily.
2. A pedicure. I dropped Ainsley off at Melissa's (THANK YOU!) and met my grandma. I ended up adding a manicure too. Definitely the highlight of my day. 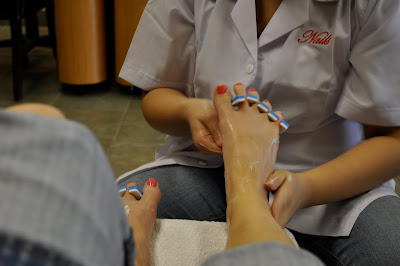 3. Taking and developing photos of the brownies I made at midnight the night before for the boys' science fair project. We had just found out that the science fair was moved up to the 10th instead of the 18th, so everything needed to be done before we left. If you want to get me riled up, just tell me that you agree that teachers should REQUIRE kids to participate in the science fair. This new deadline development also led to the next thing on my to-do list.
4. Doing my best to resist swearing like a sailor. I know, we were leaving on a cruise, so I could have used the practice, but I tried to restrain myself.
5. A visit to the pediatrician's office—Robbie's sore throat turned out to be strep, so it's a good thing we went. Ainsley was coughing, but her strep test came back negative. 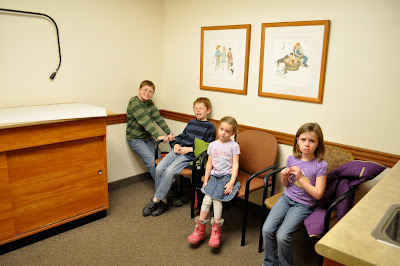 6. Haircuts for all four kids. I probably could have put this off, but I was hoping that it'd make things easier for our babysitters. Robbie and Joey don't need to have their hair sprayed and combed when it's cut short. 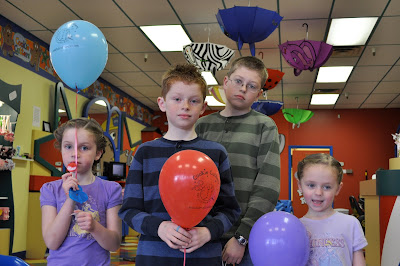 7. Laundry. Washed everything, including the sheets on our bed. I figured that we could just sleep on top of the comforter. As it turned out, I was up packing until 5:15 a.m. and Rob slept on the couch in the basement, where it was semi-quiet and dark.
8. Cleaning. I had hoped to leave the house spotless and organized, but had to settle for picked-up and vacuumed (total disclosure: a chore I delegated to the kids).
9. Ordered pizza. It was either that or cold cereal, and since Lupita was coming over, I went with pizza.
10. Tour/orientation/brain dump. I did my best not to frighten and overwhelm Lupita, but it was too late for her to back out anyway. :)
11. Picked up Robbie's prescription. While I was waiting I ran across the street and got a spray-on tan. I was still pale, but not totally pasty.
12. Went home, gave Robbie his medication, put the kids in bed.
13. Grocery shopping. Went to Target, and had to leave when they closed at 11:00.
14. Started packing. Still had laundry going at this point too. Everything was taking twice as long since I was so tired.
15. Organized the kids presents. I got them something small to open at the end of each day, as a reward for good behavior and comfort while we were away.
16. Bills. Just had a couple to get in the mail before we left.
17. Figured out which books to take. For the record, I took:
Gift From the Sea by Anne Morrow Lindbergh.
U is for Undertow by Sue Grafton.
These is My Words by Nancy E. Turner.
Rebecca by Daphne du Maurier.
The Samurai's Garden by Gail Tsukiyama.
I only read the first three out of five. I was happy with my choices.
18. Finished packing. I worked in one short hour of sleep between 5:15 and 6:15 a.m.
19. Decided that I would need all seven days to recover from getting ready to go.
Posted by Michelle at 11:59 PM